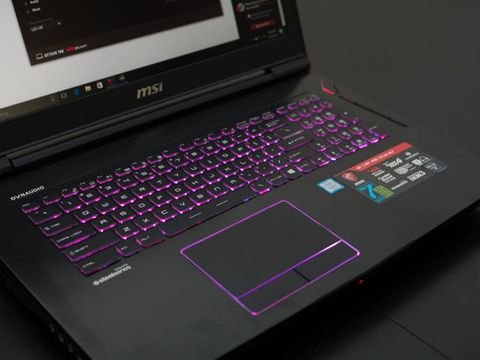 To test battery life, we set each laptop’s battery profile to Balanced while running Tomb Raider’s built-in benchmark at the lowest detail preset. The frame rate is locked at 30 FPS through GeForce Experience’s Battery Boost to limit the strain on the battery. Meanwhile, a script running in the background monitors and time stamps the system’s battery percentage. The laptops are set to hibernate once battery levels reach 5%. We test the battery life at 200 nits. Note: Back when we tested the MSI GT73VR Titan Pro, this test was conducted at 100% display brightness, rather than limited to 200 nits, so its results are omitted.

Battery life is always a point of concern in high-powered portable systems, and this is especially so for the MSI GT73VR Titan SLI 4K. Nvidia's Battery Boost technology works by limiting the frame rate, but it doesn't work with SLI configurations. Thus, the two GPUs are allowed to render the benchmark scene without limit, which draws more power from the battery. As a result, the Titan SLI's battery was drained within one hour, faster than the Eurocom Tornado F5 and its power-hungry i7-7700K. We re-tested the Titan SLI with one of the GTX 1070s disabled, which allowed us to activate Battery Boost. This time, the battery lasted just under 1 hour and 30 minutes, which isn't much, but it's a good 30 minutes more than with SLI and longer lasting than the Eurocom laptop.

We used our Optris PI 640 infrared camera to measure the laptop’s thermals. For more information about how we test, be sure to check out our Measurement Science article.

It's bad enough that laptops have to cool a CPU and a GPU, but what happens when you add a second GPU? Surprisingly, the Titan SLI's cooling solution doesn't break a sweat. Our Optris camera detects idle temperatures well within reasonable ranges, and decent temperatures after 15 minutes of Furmark stress testing. Our AIDA64 confirms that both GPUs maintain cool operating temperatures under load.

We used the SpectraCal C6 Colorimeter to measure the MSI GT73VR Titan SLI 4K's display. Be sure to check out our Display Testing Explained article for a full description of our test methodology.

The Titan SLI's UHD display exhibits decent contrast at minimum brightness. In fact, it sports the highest minimum white luminance out of the laptops in this roundup, but the minimum black luminance is too high, which lowers the contrast ratio to 780:1. If the black luminance was a tad darker, say, around the same as the Titan Pro's, then the contrast would've been much higher.

Similarly, at maximum brightness, the white luminance is nice and bright, but the black luminance is way too high.

We've come to find that laptop displays are RGB balanced at low brightness but lose that balance as the brightness levels rise. The Titan SLI is no exception. At first, the red level begins to rise as the green and blue levels fall. However, from 50% brightness and onward, the green level rises with the red, while blue continues to fall, creating a slightly yellow tint.

Very rarely do we find a display with high grayscale accuracy, so we're pleased to find that the Titan SLI's grayscale errors are unnoticeable almost across the board. The areas where they wobble a bit are at 30% brightness, between 50% and 70% brightness, and at full brightness.

The gamma point fluctuates slightly, mostly dipping below 2.2, which results in a low average gamma of 2.1428. You'll experience particularly low saturation at 10% and 80% brightness, where the gamma point is at its lowest.

Unfortunately, the Titan SLI's display exhibits a fair amount of color errors. Red, green, cyan, and magenta are all off target, and you'll notice this at almost all levels of brightness. This drives the average DeltaE 2000 well past our target of 3, the maximum point at which color errors are unnoticeable. While a dE2000 of 4.4569 isn't as high as the Titan Pro's color errors, it's still bothersome, especially if you've shelled out the money for a laptop of this caliber.