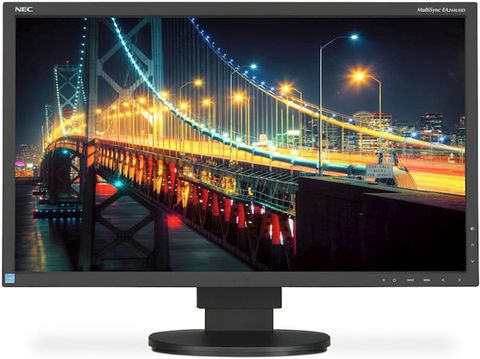 Color performance is pretty much perfect without calibration. Just unpack, plug in, set brightness to taste and go. In terms of accuracy, it can’t get much better than the EA244UHD.

NEC sells seven different monitor lines and we’ve reviewed several examples from two of them – the EA and PA series. PA screens are billed as color-accurate and, in our experience, that is quite true. We found the PA272W to be extremely well-engineered and perfectly suited for color-critical applications. From the EA line, we tested NEC's EA274WMi; it also proved to be a superb performer lacking only a wide gamut.

Today’s subject, the EA244UHD, presents something of a conundrum. While it comes from the EA series of high-end business-class monitors, our testing shows it to be one of the most accurate and consistent performers we’ve ever seen. You'll notice in the benchmarks that its out-of-box performance is pretty much unequaled.

The display also offers features found in the professional PA-series screens like SpectraView calibration and an Adobe RGB gamut option. While it’s definitely not cheap, this monitor definitely gives other professional products a run for their money.

In the category of 24-inch Ultra HD monitors, there are only two panel parts to choose from, both manufactured by LG Display. The EA244UHD and Dell’s UP2414Q are both made from the same wide-gamut component. It sports a GB-r-LED backlight and 10-bit color via an 8-bit native depth with frame rate conversion.

To take full advantage of a monitor’s bit depth, the incoming signal must match up. Ten-bit-capable video cards are generally found in the workstation space, including Nvidia's Quadro and AMD's FirePro boards. Even something as advanced as the GeForce GTX Titan only outputs 8-bit color natively. Of course, a true 10-bit panel is even better. But they are less common and more expensive.

When it comes to pixel density, today’s 24-inch Ultra HD monitors are about as high as you can go at 185ppi. Products for the desktop are still lagging behind smartphones and tablets (and even a few laptops). However, the gap is obviously closing.

The EA244UHD is aimed at high-end business users. Still, we think that photo and graphics jockeys will want to take a closer look at this new screen as well. In addition to Ultra HD resolution, it offers a wide-gamut option, calibration with SpectraView and performance to rival any professional-class screen we’ve encountered. Let’s take a look.

Next Page Packaging, Physical Layout And Accessories
16 Comments Comment from the forums