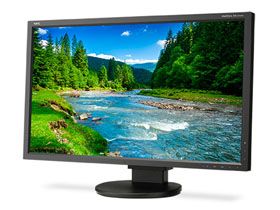 At this point, some users may still be questioning the EA275WMi’s price tag. After all, there are plenty of budget 27" IPS/QHD displays out there begging for your hard-earned dollars. When considering a monitor like this, you have to look a little deeper.

First, there just aren’t enough adjectives to describe NEC’s superb build quality. While many monitors get by with lightweight stands and thin plastic trim, the EA275WMi feels as if it’s carved from billet. Though all external surfaces are plastic, it’s of such a high grade that it might as well be aluminum. Underneath, it’s all metal with heavy shielding and greater-than-necessary protection for internal components. We can imagine this monitor still lighting up its desktop 10 years from now.

Image quality is also first-rate. Although it doesn’t include a factory calibration like its more-expensive PA-series stablemates, color accuracy, contrast, and clarity are nearly a match for those professional displays. And compared to similar screens from other manufacturers, it easily holds its own in the performance department.

What most sets the EA275WMi apart for us is its impressive enterprise features. ControlSync is one of the coolest things we’ve tried of late. In our experience, there’s no easier way to match two monitors’ brightness and color. That’s so critical when using multiple screens on a single desktop.

Equally impressive is NEC’s SpectraView II calibration software. It’s the best proprietary package we’ve used and easily outpaces the X-Rite software we’ve tried from other companies. If you already use CalMAN, it might be considered redundant, but if you currently have no means to calibrate, its $299 price-tag isn’t any higher than that of third-party solutions.

The only bummer here is the EA275WMi isn’t a great choice for gaming. With its relatively high contrast, accurate color, and multi-screen chops, it would otherwise be perfect for two or three-monitor setups. But high input lag spoils the party if you’re playing fast-paced shooters that require instant control response. For casual games though, it will work fine.

Of course NEC doesn’t market this product to gamers. It’s a business-class tool that will reliably serve enterprises of all sizes. With a rugged chassis and solid engineering, this display will likely outlast multiple computer upgrades. With that in mind, the price of admission doesn’t seem so high after all.