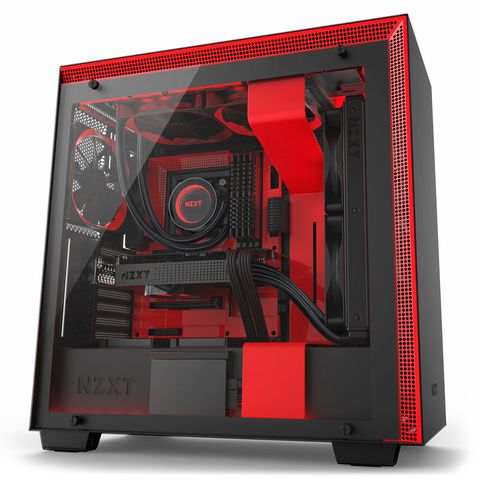 Accessories for the NZXT H700i are located in a small white box secured in one of the two 3.5" hard drive bays. The box contains various screws, zip ties, and an additional LED RGB lighting strip and extension cable. The box also contains an owners manual.

Thanks to the recent popularity of relocating hard drive racks to the area under the power supply tunnel, cases like the H700i have an abundance of space in the main compartment for water cooling components. In fact, even though this chassis is equipped with a trio of 120mm intake fans, a 140mm exhaust fan, and a large cable management bar, there is more than enough room for a custom cooling loop, reservoir, and a multi-GPU set-up with room to spare.

While we are on the subject of space, it's worth mentioning that it's becoming increasingly common among case manufacturers to list support for E-ATX motherboards up to 10.7”. Although that sounds great, true E-ATX motherboards measure 12 x 13” deep. You can imagine how unhappy you'd be if you bought this case under the assumption it supported a full-sized E-ATX motherboard.

There are mounting locations for a total of three 3.5” hard drives and seven 2.5” drives, two of which are convertible from the two 3.5" drive slots mounted under the PSU tunnel. Of the five dedicated mounting locations for 2.5" drives, two are located behind the motherboard tray and three are mounted to the outside of the PSU tunnel. The 2.5” drive caddies mounted to the PSU tunnel are plastic and are removed by squeezing them from the sides. Although both 3.5” drive racks are removable, you have to remove the top hard drive rack to access the bottom drive rack. Additionally, you can move the 3.5” hard drive racks closer to the front panel or rear of the chassis (toward the PSU).

Cooling duties are handled by three 120mm front intake fans and a large 140mm exhaust fan behind the CPU socket area. The sheer number of fans installed in this chassis from the factory should provide more than enough airflow for even the most demanding system configurations.

As with all cases of this size, most all-in-one coolers can be physically mounted in the front of this chassis, but because of the fixed length of the tubing, some coolers might not be able to reach the CPU socket. However, these locations are ideal for mounting radiators for water-cooled graphics cards.

Radiators and all-in-one liquid coolers up to 360mm can be mounted inside the main compartment of the chassis. The front of the chassis can easily support radiators sandwiched between fans in a push-pull configuration. The exhaust fan mounting location can be fitted with 120 and 140mm coolers in single and dual fan configurations.

NZXT bills the H700i as a “smart case.” The company employs the use of an Adaptive Noise Reduction algorithm that actively adjusts fan speeds based on measured noise and CPU/GPU temperature changes. This chassis is also equipped with a fan controller/LED RGB lighting controller with three 10W fan channels and support for up to four LED lighting strips or five RGB fans.