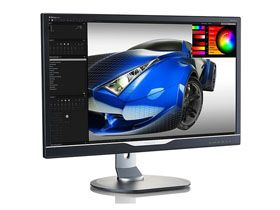 The 288P6LJEB looks like all of the other Ultra HD TN-based screens we’ve photographed. It’s fine viewed head-on or at slight off-center angles, but at 45 degrees, a reddish-green shift occurs in the horizontal plane. There is also a brightness reduction, even if detail holds up pretty well. When viewed from 45 degrees above, there is no color shift. The detail loss there is significant, though.

Our press sample has a just-visible center hotspot. If not for that, this result would have been much better because all the other zones are quite close in brightness to one another.

The white field looks perfect to our eyes, and the C6 seems to agree. It’s the best white uniformity result of all the TN screens in our database except for BenQ's RL2460HT.

The 288P6LJEB’s color uniformity is better than many other screens, regardless of type. We saw no flaws whatsoever.

Since Philips is representing the value side of Ultra HD displays, it is likely to be considered by gamers seeking maximum pixel density. The good news is that our test group's TN screens have decent pixel response performance. Most IPS monitors average around 25ms, though the NEC in this comparison is a happy exception. The real question, however, involves input lag. That has a much greater impact on game play than one or two milliseconds of draw time.

Even though the 288P6LJEB runs just fine at 60Hz, it is well behind the Asus and Planar monitors in our lag test. It is at least much easier to game with than the Dell which is hampered by a 30 Hz refresh rate. But if you need fast response to inputs, the Philips is a poor choice. We had no trouble using it for productivity. Mouse cursor movements are fluid and responsive. But trying to keep up in a first-person shooter proved difficult.

Prev Page Results: Color Gamut And Performance Next Page Philips 288P6LJEB, Solid Build And Performance
20 Comments Comment from the forums
Be In the Know