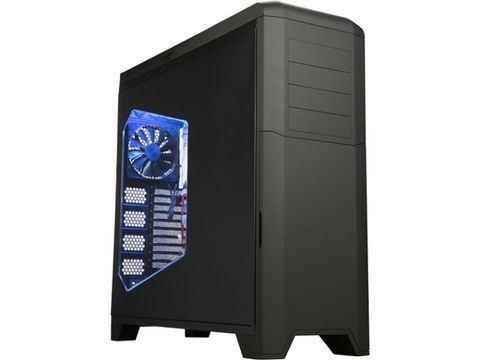 The B2 Spirit includes a reasonable good user’s manual, plus bag of screws with motherboard standoffs and cable ties.

Cable ends include two USB 3.0, one USB 2.0, HD Audio, switch and LED. The power LED lead is split for both standard and Asus (old-school AT) spacing, and the similarly-outdated AC-97 pigtail is eliminated.

Cushioned pins reduce vibrational transmission from 3.5” mechanical drives, and slide out to ease screw mounting of 2.5” drives with the connector positioned in the same place.

Our full-ATX parts look tiny inside the B2 Spirit.

Perhaps the tiny appearance of full-sized parts is why Rosewill decided to use a small window, relative to the huge size of its side panel? That does help the case appear more “filled” in an ordinary configuration.

We continue to use our reference PC with its reference overclock for case testing, apart from replacing the X99S XPower AC with the X99S Gaming 7. That replacement has allowed us to compared tighter “Standard ATX” cases, since the XPower motherboard is oversize.

Noise is measured .5m from the case’s front corner, on the side that opens. The numbers are corrected to the 1m industry standard — used by many loudspeaker and fan manufacturers — by subtracting six decibels.

The closest match in market to Rosewill’s B2 Spirit is Azza’s GT1, though the B2 Spirit has a slightly higher-quality fit and finish. The Define S and MasterCase 5 by comparison are ATX-based, with only the Define S supporting slightly oversized ATX boards, and both of those smaller cases are designed to be used with additional fans.

Equiped from the factory with two intake and three exhaust fans, the B2 Spirit is designed to run well out-of-the-box. It returns excellent temperatures from our overclocked Haswell-E and mid-sized cooler, and likewise beats all competitors in GPU cooling.

The B2 Spirit isn’t just cooler, it’s also quieter than its closest competitor in size. As for the closest in design (having a closed front-panel over front fans), the Define S achieves the same average noise level.

Cool and quiet are both great ways to top an acoustic efficiency chart, and that’s exactly what the B2 Spirit does. Rosewill should be thrilled with these results.

Because the Azza GT1 is the only case we’ve tested with the same hardware, and that’s also in the same target market as the B2 spirit, we really only need to figure out if the $170 B2 Spirit is worth $40 more than the $130 GT1. The answer to that question is far tougher than I’d like it to be, if only because I value the B2 Spirit’s higher quality, better performance and flip-out fan holders over the GT1’s removable motherboard tray and somewhat-flimsy card brace. To say that I’d pay the extra $40 for the B2 Spirit would only be meaningful to those who understand my excruciating frugality.

Even though I’d rather call B2 Spirit a “better bargain” for its remarkable step upward in quality, my willingness to make concessions to those who demand removable motherboard trays demands that I treat the cheaper GT1 as having similar value. Since the GT1 already received our stamp of approval, so too proceeds the B2 Spirit.


MORE: How To Build A PCMORE: All Case Content

Prev Page Specifications, Interior & Exterior
14 Comments Comment from the forums
Be In the Know