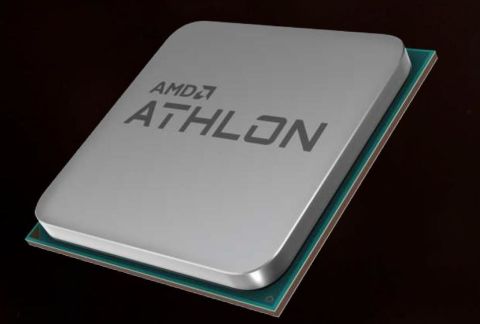 The Athlon 200GE is a solid value, given its price point. But there are obvious trade-offs you'll have to accept after buying such an inexpensive CPU. Its biggest shortcomings are apparent in lightly-threaded workloads. Fortunately, unofficial overclocking, currently enabled on a handful of motherboards, helps improve the 200GE's benchmark results.

Return of the Athlon

The Athlon 200GE is built using the same Zen architecture found in AMD's popular Ryzen processors, providing a much-needed performance upgrade over the lackluster Bristol Ridge line-up. Given its low price, we shouldn't have been surprised that AMD locked the 200GE's multiplier, preventing easy overclocking. But its efforts proved superficial: recently, several motherboard manufacturers released BIOS updates that unlocked the 200GE's fixed ratio. All of the sudden, this ultra-affordable chip became a little more interesting to enthusiasts shopping for a bargain.

Officially, AMD maintains that the 200GE is a locked processor and points us to motherboard manufacturers for answers on any policy changes. In other words, for now, overclocking the Athlon 200GE is game-on. Better still, the 35W chip's stock thermal solution is perfectly ample for a bit of extracurricular tuning. Where we might not have been interested in the 200GE previously, the CPU is a far more impressive value with overclocking as an option.

The Athlon 200GE drops into motherboards with a Socket AM4 interface. It comes with two SMT-enabled execution cores, allowing the chip to operate on four threads concurrently. The Radeon Vega-based graphics engine is composed of three Compute Units (CUs), serving up a modest 192 Stream processors.

Out of the box, the Athlon 200GE's host processing cores operate at a fixed 3.2 GHz, with no boost. The graphics component has a 1 GHz clock rate.

Recently, motherboard firmware updates from MSI and Gigabyte made it possible to overclock the Athlon 200GE. These are the only updates available built on AMD's underlying AGESA 1.0.0.6 code. AGESA, or AMD Generic Encapsulated System Architecture, is a bootstrap protocol that initializes processor cores, memory, and the Infinity Fabric. Currently, we assume that the unlocked multiplier is a result of the new AGESA code, though we don't have confirmation. We'll have to wait for updates from other manufacturers for more evidence.

Remember that AMD's warranty doesn't cover overclocking-related damage on any of its processors. We're sure that limitation is even more strictly enforced on a CPU like the Athlon 200GE, since it's officially a multiplier-locked CPU.

The Athlon 200GE is a natural fit for entry-level Socket AM4 motherboards with the A320 chipset. These sell for as little as $50, and they offer the flexibility to upgrade to a faster Ryzen CPU in the future. You also get the benefit of USB 3.1 Gen 2 and NVMe support (though features vary by board).

This new Athlon processor like features the same underlying design as AMD's Ryzen 3 2200G and 2400G processors, albeit with a pared-down feature set that allows the company to offload Raven Ridge dies that suffered defects during the manufacturing process. Similar to the aforementioned Ryzen 3s, the Athlon 200GE comes with 4MB of L3 cache. It also accelerates the AVX instruction set, unlike Intel's Pentium and Celeron CPUs.

AMD originally told us that beefier Athlon 220GE and 240GE processors would land in Q4 2018 to help fill in the space between its $55 Athlon 200GE and $100 Ryzen 3 2200G. But seeing as though the company isn't saying anything about those CPUs' specifications, we have our doubts whether it'll make the end of 2018.

Naturally, the new Athlons aren't performance-oriented processors. Instead, AMD says they're ideal for basic computing tasks like Web browsing, word processing, and low-end gaming. The idea here is that you don't need to pair the Athlon 200GE with a discrete graphics card. Its three Vega CUs, with 64 Stream processors each, come together in a very entry-level GPU. The Ryzen 3 2200G's eight CUs are far more capable. But AMD claims its Athlon 200GE is still capable of playable frame rates at 720p in eSports games. The experience it enables is helped along by FreeSync support, so long as you own a compatible monitor.

Current page: Return of the Athlon

Next Page Overclocking and Test Setup
Be In the Know