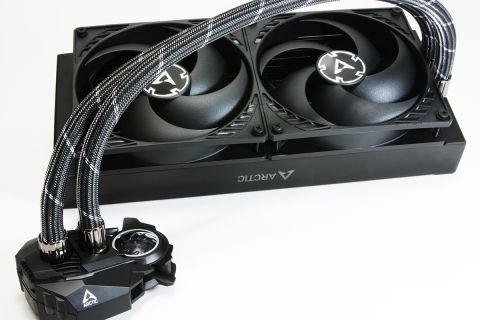 Arctic recently a new lineup of Liquid Freezer II coolers, including the handsome 280mm Liquid Freezer II 280 that we’re looking at here. For the line, the company has developed its own pump design, choosing not to rely on an OEM (such as Asetek or CoolIt) as a product base to rebrand their solution, as many other companies have done. And the results are impressive, making the Arctic Liquid Freezer II one of the best CPU coolers you can buy.

Arctic takes a minimalist approach to in-box accessories with the Liquid Freezer II 280 – even the installation manual is a web-based page launched via QR code presented on a small card. Still, the cooler supports the majority of current Intel desktop CPUs as well as AMD’s AM4 (Threadripper) socket. Artic has taken the approach of appealing to the masses and including the mounting hardware used by most system builders and gaming enthusiasts. A small packet of MX4 thermal compound is also provided to get the installation process moving without delays.

The futuristic design of the Liquid Freezer II 280 pump unit includes an integrated cooling fan to help circulate air in the vicinity of the CPU block, including motherboard PWM heatsinks and memory modules. This fan is powered on when the pump is operational while also sending power up through the inside of one of the graphite and white braided coolant sleeves to manage the PWM 140mm radiator fans via a splitter cable.

The base of the Liquid Freezer II 280 cooling block is made of milled, stain copper. The offset pump impeller is easily evident while auxiliary power cabling to the cooling fan is split and routed beneath the cooling unit to the small, 3-pin fan header. Mounting brackets for the block are secured alongside each side of the copper cold plate with screws via threaded mounts embedded within the housing.

Arctic utilizes a 38mm-thick aluminum radiator for the Liquid Freezer II 280, which provide additional cooling area by increasing the density and total number of fins when compared to most 30mm thick AIO radiators on the market. The pair of fluid dynamic-sleeved P14 fans are rated up to 1700 RPM and 72.8 CFM of airflow at maximum speed, to promote thermal exchange away from the radiator cooling fins.

The Arctic Liquid Freezer II 280 mounts easily in a chassis designed to support 280mm liquid cooling radiators which -- to clarify -- is a different requirement than support for a 240mm AIO liquid cooler. Make sure to double-check your case manual before buying. The auxiliary cooling fan on the CPU pump unit can be oriented in whichever direction you choose, as it’s designed to provide a spread-focus blast of air over the components you wish to benefit.

We chose to orient the fan towards our graphics card backplate in order to supplement cooling of the GPU rather of pointing it towards the motherboard power delivery heatsink. We felt this would be an ideal alternative setup chosen by many power users and gaming system builders.

While the Liquid Freezer II 280’s 140mm fans are factory installed and managed with the same PWM power that controls the pump and auxiliary fan, we opted to disconnect the fans and run them independently for our tests, allowing for independent PWM cooling fan management while the pump remained powered at 100%.