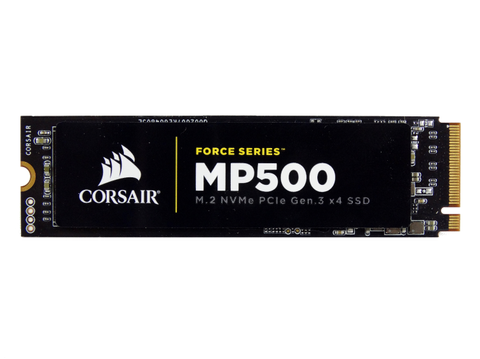 In short, we like the Corsair MP500 but we don't want to pay a high price for it. Corsair didn't lead with the Phison E7, it followed lesser known brands with a similar product. SSDs don't make the margins they used to so engineering resources are going away. Still, we expect a company with the talent that Corsair has to bring something new to the game.

Consumer NVMe products have been on the market for more than two years now, but most models came from large tier-one manufacturers with proprietary in-house controllers. The smaller companies that rely on third-party controllers have been quiet until recently. Most of the third-party controllers began to ship a few months back, but the retail products were not fully optimized and didn't live up to their full potential. The Corsair Force Series MP500 represents the second wave of Phison PS5007-E7 products that feature superior firmware and a dash of Corsair ingenuity.

Corsair recognized an opportunity to bring a better product to market by waiting for mature firmware. The company has several product lines, so it didn't need a new SSD to keep moving forward. Not all the improvements come from the controller manufacturer, though. Corsair engineered a better E7 NVMe SSD with higher performance, better cooling, and an attractive design.

The MP500 features a black printed circuit board. That shouldn't mean much, but, as CES taught us, it's an RGB world now.  The SSD would look attractive with black motherboards, which obviously means more to some than others. Corsair also designed a new label that places a copper strip over the small controller and NAND flash.  The strip runs the entire length of the label and spans the full width. In theory, it should absorb some of the heat generated by the PS5007-E7 controller and dissipate it faster because of the increase in surface area. It should work, but we are not sure if it's enough to make a meaningful difference. Samsung pioneered the sticker technique on its 960 series. We're still not sold on how functional the copper strip cooling method is, but it shouldn't hurt.

Phison supplied Corsair with the latest firmware for the MP500 launch. Phison's MP 2.1 firmware update went to several of the previously-released E7-equipped products. We're still waiting on Zotac, the first to bring this controller to the North American market, to update to version MP 2.1.

Early in the MP500 release cycle, word got out that the drive utilizes twice the amount of DRAM as the other E7-based NVMe SSDs, but that isn't the case. We compared our MP500 samples to those from Apacer, MyDigitalSSD, and Patriot. All four 480GB drives use the same Nanya DDR3 modules with 512MB of memory. The four 240GB samples use the same 256MB DDR3 DRAM.

The MP500 comes to market at a premium price point. Corsair will use the MP500 to take on Samsung's new 960 product line rather than firing shots at the entry-level Intel 600p. It's a bold move on Corsair's part, but by the end of this review, we'll be able to determine if it was the right choice.

The Force Series MP500 comes to market in three capacities that scale from 120GB to 480GB. We have the popular 240GB and hefty 480GB in the lab for testing (we rarely test 128GB-class SSDs). According to Corsair's documentation, all three NVMe SSDs share the same sequential performance specifications. The MP500 rings the bell with 3,000 MB/s of sequential read throughput and 2,400 MB/s of sequential write speed. The smallest capacity model offers 150,000/90,000 read/write IOPS, while the two larger drives achieve 250,000/210,000 read/write IOPS.

Corsair's performance numbers are higher than some of the other E7-based products on the market. For the most part, the varying specifications stem from how each respective vendor tests. Some companies still publish performance data based on ATTO Performance Benchmark, and others use CrystalDisk Mark. Corsair actually publishes data from both on its official product page. We test with different software using a single worker for synthetic four-corner workloads, so our data is more in line with what you will see in the field.

The Corsair product page for the Force Series MP500 lists the 480GB drive with 1024MB (1GB) of DRAM, and the company cuts the DRAM capacity in half for each capacity shrink. There has been some confusion in other reviews about the DRAM capacity. The Apacer Z280, MyDigitalSSD BPX, and Patriot Hellfire M.2 480GB SSDs all ship with 512MB of DDR3. In our testing, we failed to notice any improvements over the other products, at least where the additional memory should increase performance. Until that point, we just took the specifications for what Corsair provided. Later, we examined our four PS5007-E7 M.2 480GB SSDs and found they all use the same Nanya-branded DRAM. The same was true for our four 240GB drives.

Corsair released a Double-DDR version of the Phison S10 under the Neutron XTi branding, and we know Phison is working on a "Double-DDR" version of the E7. We have an add-in card with the design, but it uses older firmware so the gains are not representative of what would come to market as a Double-DDR E7. A newer design would be even faster. We're not sure where the confusion originated, but the MP500 is not much different than the other M.2 SSDs with the E7 controller.

Corsair covers the Force Series MP500 with a paltry 3-year warranty and the standard write endurance limits. The warranty allows for up to 640TB of data writes for the 480GB model. That drops to 349TB and 175TB for the two smaller capacity drives.

An accessory package is nonexistent with the MP500. We received a paper manual with contact information for support services. The Corsair SSD Toolbox will eventually work with the Force Series MP500, but currently, users do not get access to all the features with this series. We expect Corsair will update the SSD Toolbox software in the near future to support more features, and hopefully give the aging software a facelift at the same time.

The Force Series MP500 ships in a very small package that isn't much larger than a 2.5-inch HDD. M.2 SSDs are smaller than typical SSDs, so the package can be smaller while still providing adequate protection for the product inside.

As we mentioned, Corsair used a custom black PCB. This is a first for a Phison E7-based M.2 SSD that we know of. The overall layout of components appears the same as the other E7 SSDs we've tested in the M.2 form factor. Every capacity uses a double-sided version of the 2280 form factor. This may cause installation issues in some early NVMe-enabled notebooks, but all the modern designs seem to work fine with the extra thickness.

It's a strange world we live in when we consider the sticker a component worthy of discussion. There are at least four to five layers to the controller-side sticker. The copper layer rests just one layer away from the controller, DRAM and NAND flash packages. The E7 controller uses a flip chip design that is very, very small. It can generate a lot of heat, but there is very little surface area available for thermal dissipation.