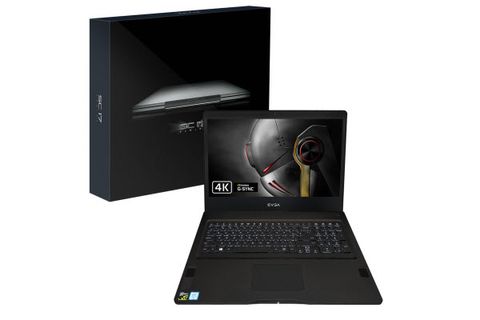 EVGA is relatively new to gaming laptops, having revealed the SC17's first iteration last year at CES. Since then, the company has released another version, featuring Nvidia’s GeForce GTX 1070 GPU. That appears to be the only change, and perhaps that's a good thing.

One of the SC17’s main selling points is its UHD (3840x2160) display, and we'll see if the Pascal GPU grants the SC17 enough horsepower to unleash it.

The EVGA SC17 arrived in a simple black box with a stylized image of the laptop and “SC17 Gaming” printed on the lid. The left and right sides also have “SC17 Gaming” stamped in silver, while the top and bottom sides show the company’s logo. A plastic moulding splits the box into compartments: one for the power adapter, two for the adapter’s wires, one for accessories, one for the user manual, and a large compartment for the actual SC17.

The accessories include a USB Type-C-to-Type-A adapter and a male 3.5mm-to-3.5mm output x2 adapter, the latter because there’s only one audio jack on the SC17. The SC17’s power adapter is slim, which lets you transport without introducing much bulk to your bags. Package presentation has absolutely no effect on a laptop’s performance, but we still appreciate a premium product experience; kudos to EVGA.

The EVGA SC17’s lid features gorgeous, CNC-cut aluminum construction with a black, anodized finish. The clean finish is quite a sight to behold, but it’s easily blemished by smudges and fingerprints, which is trait we’ve found on virtually all laptops that fancy metal construction. However, we found these blotches much easier to clean off the SC17 than those we find on brushed metal finishes. In the middle you’ll find EVGA’s logo placed in the middle, and it glows white when the system is powered.

The same gorgeous finish carries over to the inner surface surrounding the keyboard and the touchpad, with the positive being a crisp finish to admire, and the negative being the blemish problem, which is exacerbated by how often you'll make contact with this surface. Keep a microfiber cloth handy. In the top right corner, you’ll find a circular power button, which, oddly enough, isn't illuminated when the system is powered. The company’s logo is stamped below the display in an understated gray.

The SC17’s speakers are located on the left and right edges below the keyboard. Most manufacturers place their speakers on the front lip, which means the audio isn’t facing you directly, or that your arms can easily block the speakers when you're using the keyboard and trackpad. The SC17’s placement is much better, but you still might find yourself blocking the speakers while using keys on either side of the keyboard. We've found the most ideal placement to be right next to the hinge.

The edges feature the same, luxurious aluminum finish. The clean, CNC-cut edges make the SC17 appear a lot thinner than it really is; in reality, the laptop measures 1.07" at the widest point. There are two small exhaust ports on the left and right side of the laptop, and two larger exhaust ports on the back edge that extend to the bottom of the laptop. Maintaining its elegant, minimalist aesthetic, the SC17’s rear exhaust isn’t designed like a gaudy, super-car exhaust. Instead, the exhaust features tastefully shaped cutouts with a gunmetal border to contrast the black aluminum finish.

The hinge in the middle is wrapped by a large, rubberized plastic bar with the company’s logo engraved on the back edge and "EVGA SC17 GAMING” printed in glossy black on the top edge. The hinge provides about 120° of movement. Many of the hinges we’ve come across in the past either feel jerky and stiff, or loose and unsupported. However, the SC17’s hinge is both supportive and, dare I say, buttery smooth [Ed. No, that phrase has been banned from Tom's Hardware.]

Don’t expect anything less from the bottom panel either. It also features an anodized aluminum finish and is quite rigid. There are three rubber feet to keep the SC17 stable: two small feet near the front and one large foot spanning the length of the back of the laptop. The large foot also has EVGA’s logo engraved into the rubber. There are several air intake cutouts on the bottom panel, two of which are located below the system’s fans. Metal grilles are bolted behind the intake cutouts to prevent large dust particles and debris from entering the laptop. Overall, the EVGA SC17 is one of the most well constructed laptops we’ve seen come through the lab; its anodized aluminum construction is only matched by the similarly constructed Razer Blade (2016).

EVGA keeps the I/O ports simple. On the right, you’ll find a USB 3.1 Type-C port, two USB 3.0 ports, a combination headphone/microphone out, and a Kensington lock. You can use included adapters to convert the Type-C-to-Type-A connector and the 3.5mm out to two separate 2.5mm out ports. The left side features another Kensington lock, the DC power input, an RJ-45 Gigabit Ethernet port, an HDMI 2.0 port, and two Mini DisplayPorts.

The EVGA SC17 boasts a UHD (3840x2160) matte IPS display, outputting at 60Hz. The 4K display produces a crisp image, ideal for watching 4K videos and editing high-resolution photos. The HDMI and Mini DisplayPorts allows users to connect three additional displays. We don't see too many UHD gaming laptops come through, so it'll be interesting to see how well this model delivers on this lofty display target.

The SC17’s scissor-switch keyboard features a number pad and white back-lighting. There are six brightness levels, which can be adjusted with “Fn + F3” or “Fn + F4." The scissor switches in most laptops feel mushy, but the SC17’s switches feel relatively crisp for a laptop keyboard. The keys are spaced a bit too far from each other. Typing experience usually comes down to preference, but the SC17’s laptop might better suit users with large hands.

Unfortunately, the trackpad leaves much to be desired. Clicking isn’t uniform; the middle bottoms out at a more shallow point than the left and right sides, which bottom out deep enough for dust and debris to enter. Finally, the top half of the trackpad cannot be pressed down at all. Tracking isn’t much better either. Wide movements are fine, but the trackpad’s surface will drag your finger while trying to make small movements.

10 Torx head screws keep the bottom panel attached to the chassis. Underneath you’ll find two large heatsinks for the CPU and GPU, along with the associated heat pipes and exhaust fans. Above the CPU heatsink there are two DDR4 memory slots. Above the memory is the Intel Dual Band Wireless-AC 8260, which handles the SC17’s Wi-Fi connectivity. To the left, there’s an M.2 SSD slot and a CMOS battery. On the top right corner, you’ll find the 2.5" SATA slot, which is occupied by a 1TB 7200RPM drive; the 2.5" slot has its own metal shroud. Finally, the 74.48Wh lithium ion battery is located at the very top.

A mobile version of EVGA's PrecisionX software comes pre-installed on the SC17. With PrecisionX mobile, you can easily overclock the SC17's CPU and GPU by switching between Normal and SuperClock. You can also adjust the keyboard's backlighting intensity through PrecisionX Mobile, or toggle a backlight breathing effect.