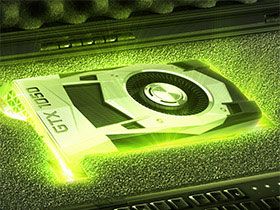 Nvidia owns the high-end graphics space with its Pascal-based GPUs. AMD is making a big splash in the mainstream market with its Polaris-based cards. Inevitably, the companies’ 14/16 nm processors were bound to overlap. The PC world is perhaps most transfixed by the coming of AMD’s Vega GPUs, which promise performance to rival the top tier of GeForce cards. But that won’t happen until the first half of 2017 (presumably closer to mid-year).

In the nearer term, Nvidia is ready to battle AMD’s 2 GB and 4 GB Radeon RX 460 with its GeForce GTX 1050 and 1050 Ti, announced earlier this month. Both models utilize a new GPU called GP107. It’s composed of 3.3 billion transistors and manufactured on a 14 nm FinFET process—notably not TSMC’s 16FF+ node. Although the processor originates from a different foundry, GP107 continues to reflect the Pascal architecture’s basic resource allocation.

Of course, some of Pascal’s flagship features aren’t as relevant as we venture down into this budget segment. Simultaneous Multi-Projection, for instance, takes geometry data and processes it through as many as 16 projections from one viewport using a special hardware block. Gaming across multiple monitors or through a VR HMD are applications that stand to benefit. However, neither is realistic on a sub-$150 graphics card.

The GeForce GTX 750 Ti was such a big deal back in 2014 because it made 1920x1080 gaming accessible from a 60 W graphics card. It drew all the power it needed through a 16-lane PCIe slot. Some GeForce GTX 1050 Ti cards will repeat that feat by ducking in under a 75 W ceiling, while others purposely step past it and incorporate six-pin power connectors for greater overclocking headroom.

GeForce GTX 1050 Ti employs the aforementioned GP107 in its uncut form. All six of the GPU’s Streaming Multiprocessors are enabled, split between two of what Nvidia calls Graphics Processing Clusters. The four existing Pascal-based chips pack five SMs into a GPC. GP107, in contrast, sports three SMs per GPC.

With 128 single-precision CUDA cores per SM, GeForce GTX 1050 Ti wields a total of 768. Each SM also includes eight texture units (adding up to 48 across the processor), 256 KB of register file capacity, 96 KB of shared memory, and 48 KB of L1/texture cache.

The back-end of GP107 is correspondingly trimmed to reflect the 1050 Ti’s mainstream pedigree aimed at 1920x1080 gaming. Four 32-bit memory controllers provide an aggregate 128-bit data path. Similar to other Pascal-based GPUs, each controller is associated with eight ROPs and 256 KB of L2 cache, adding up to 32 ROPs and 1 MB of cache. Nvidia arms the 1050 Ti with 4 GB of 7 GT/s GDDR5 memory able to move up to 112 GB/s. And the company is quick to point out that Pascal’s memory optimizations improve effective bandwidth compared to prior architectures, too. Adapted from our GTX 1080 coverage: "[GP107's] delta color compression tries to achieve 2:1 savings, and this mode is purportedly enhanced to be usable more often. There’s also a new 4:1 mode that covers cases when per-pixel differences are very small and compressible into even less space. Finally, Pascal has a new 8:1 mode that combines 4:1 constant compression to 2x2 blocks with 2:1 compression of the differences between them."

Given the overclocking headroom our sample demonstrated (more on this shortly) and GP107’s higher stock voltage compared to GP106, it seems as though GeForce GTX 1050 Ti’s factory spec is determined by the board’s 75 W TDP rating. Similar to GeForce GTX 750 Ti, Nvidia wanted this card to get its power from a 16-lane PCIe slot, and exceeding that figure with higher voltage/frequency would have required more juice from another source. Partners that build 1050 Tis with six-pin connectors should be able to extract quite a bit more performance through higher clock rates, we're guessing.

According to Nvidia, GeForce GTX 1050 Ti cards will start at $140, making them at least $10 more expensive than most 4 GB Radeon RX 460s. If we’ve learned one thing from this year’s graphics card launches, however, it’s that suggested pricing is just that, and GPU manufacturers are quick to disavow themselves of responsibility when the card vendors charge more.

Nvidia hopes to see the pared-down GeForce GTX 1050 selling for $110, which puts it squarely up against the Radeon RX 460 (AMD’s 2 GB cards go for $110, while the 4 GB model starts around $130). Dimensionally, our 1050 Ti and 1050 samples from MSI look identical. All of the differences between them are hidden by a dual-slot heat sink.

For starters, the 1050’s GP107 processor has one of its SMs disabled, cutting 128 CUDA cores and eight texture units. What’s left is a GPU with 640 CUDA cores and 40 texture units. Nvidia makes up for some of that resource loss—and exploits the drop in power consumption—with slightly higher clock rates. GTX 1050’s base frequency is 1354 MHz; the GPU Boost rating jumps to 1455 MHz.

GeForce GTX 1050 should be quicker than GTX 950, one of our favorite models for 1080p gaming. That 90 W card previously sold for $140 and required one six-pin power connector. More performance for less money, without the six-pin connector allows the 1050 to shine in environments the 950 wasn’t as well-suited to. Moreover, GP107 incorporates a lot of fixed-function media acceleration the GeForce GTX 750 Ti didn’t have, such as HEVC decode at up to 4K60p and VP9 decode.

HTPC enthusiasts can expect to wait a while for GeForce GTX 1050 availability, though. Whereas the 1050 Ti should show up for sale right away, Nvidia’s guidance suggests the cheaper version won’t land until the second week of November. There won’t be any reference (Founders Edition) designs. All of the 1050 and 1050 Ti cards will come from board partners, so pay close attention to specifications, particularly if you want a model without a power connector.