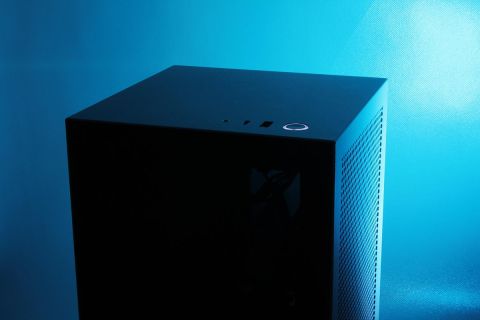 The NZXT H1 was compared against our standard small chassis and cooler build, the Silverstone LD03 with the Scythe Choten TUF cooler. Our Intel i3-8350K running at 4.0Ghz provides our version of a SFF desktop build for comparison.

Primary differences between the NZXT H1 and the Silverstone LD03 lie with the CPU cooler utilized for each test.  The Silverstone is running our standard low-profile Scythe Choten TUF edition cooler while the NZXT H1 is using the provided 140mm AIO that comes with the chassis.

Noise levels between the two systems are nearly identical, with a slight edge going to the NZXT H1. Otherwise, both of these small systems are running whisper quiet.

Tiny differences in registered noise levels and very similar thermal performance mean that the differences in acoustic efficiency are amplified. The NZXT H1 benefits from remaining cooler under load by a small margin, while celebrating a razor’s edge victory in acoustics.

The NZXT has a launch day price listing of $349, making it a rather large, single purchase – especially considering it is an ultra-compact chassis. Having a price tag more than double that of the Silverstone LD03 makes it seem like the H1 is difficult to recommend. But while there is a dramatic difference in cost between these two cases, the NZXT H1 also includes a 650w SFX PSU and a 140mm AIO. Unless you had them already from a previous build, both items would be otherwise required purchases for a new build.

Images from our FLIR ONE Pro show relatively similar thermal soaking around the power supply and around the entire motherboard.  Small variations in the tubing and radiator of the 140mm AIO provide indication of the difference in fan speed and ability for the cooler to dissipate thermal load more effectively when fan speed is 100%.

NZXT provides a lot of value with the new H1 chassis, primarily due to the inclusion of the 650w power supply and a 140mm AIO. Wiring for the power supply is also factory bundled and managed with cable wraps, while the cooler is pre-installed to streamline the build process and minimize the need for cable management.

Considering the separate purchase price of these items, and the fact that both come pre-installed, make the NZXT H1 case both a good choice for those who want to save money, as well as those who want to save time or frustrations while building their compact PC. If you embody both those desires, NZXT’s new compact case is a clear winner, despite what seems like a high asking price.