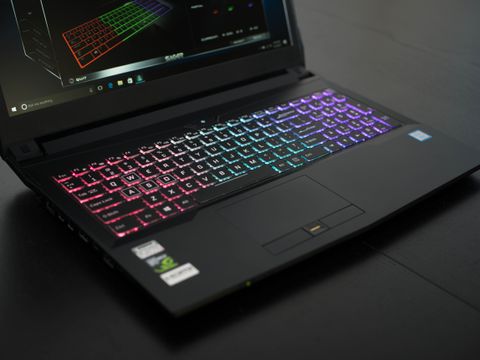 The Sager NP6852 offers great performance at its price, but much better performance is available for $300 more, and similar performance coupled with great build quality can be found for $500 less.

Many of the laptops we’ve tested recently feature Nvidia’s GeForce GTX 1060 GPU, which offers excellent performance in modern games for a decent price. However, even a moderately priced gaming laptop is an investment. Trade-offs meant to hit lower price targets include lesser parts, namely memory, CPU, storage, and display quality.

But along came Nvidia’s GTX 1050 Ti, which lowers the price of gaming laptops further. We're testing Sager's NP6852, which includes almost all of the features of a solid, moderately priced laptop, but with an even more affordable GPU.

The Sager NP6852 is based on the Clevo N850HK1, so it arrives in Clevo’s generic packaging. Two closed cell styrofoam pads keep the NP6852 secure, and there’s a separate compartment just for the 120W adapter. You’ll find a disc containing drivers and manuals, a quick guide booklet, a screw to install a 2.5" drive, and an extra thermal pad for the GPU’s VRAM.

The Sager NP6852 features a black plastic chassis with a matte finish. Matte surfaces are great because they don’t attract fingerprints as easily as brushed metal or glossy plastic. However, the plastic used on the NP6852 doesn’t feel premium at all, unlike that of the Sager NP8156 and its brushed metal finish. The NP6852’s surface scratches rather easily and flexes quite a bit, and we worry this may endanger the laptop’s display. There are four edged accents running on the top cover—two on the sides, one on the top, and one on the bottom—which give the NP6852 a bit of gaming flare. In the middle of the lid Sager has stamped its logo in reflective chrome.

Not much changes when you open the lid; you’ll find the surfaces surrounding the inputs constructed out of the same plastic as the top of the laptop. Light poking and prodding flexes the plastic, which doesn’t inspire much confidence in the NP6852’s durability. This is in stark contrast to the NP8156, whose two-tone metal and plastic finish is incredibly sturdy. You’ll find more aggressive gamer accenting around the keyboard and the power button, which gives the laptop some much needed style in what would otherwise be a plain, black chassis. The power button’s shape is stylized in an elongated pentagon.

The stylized gamer touches carry over to the NP6852’s front, back, and side edges, with no changes in construction. The back edge has super-car exhaust cutouts, with the middle of the backside featuring a subtle, glossy finish. A small hive pattern surrounds the exhaust cutouts; you’ll find the same hive pattern surrounding the speakers in the front lip. Another exhaust vent is on the right lip, albeit without stylization.

The laptop’s bottom panel is also constructed out of plastic, but it has a grainier surface than the lid and the area surrounding the inputs. There are two sets of air intake cutouts: one in the middle and one on the top-left side near the front lip. The top-right set of cutouts is just for looks and doesn’t actually have holes cut through the cover. There are large rubber feet on each corner of the bottom cover to keep the laptop stable. You’ll notice that one of the feet is actually on the battery’s housing. The battery is connected externally as part of the bottom panel and is secured with two sliding locks.

The two speaker cutouts are also on the bottom panel, a position that we’ve found to be problematic in the past. Downward facing speakers are naturally muffled and would serve the user much better if they were facing upward, such as how Sager's own NP8165’s speakers are placed.

The NP6852 has a rather stiff hinge that extends outward by about 135°. As another example of the questionable build quality, the plastic near the power button flexes when you swing the display forward or back.

The Sager NP6852 features a Full HD (1920x1080) 60Hz matte IPS display with excellent viewing angles. Up to three additional display can be connected via the two Mini Displayports and the HDMI port.

The Sager NP6852’s keyboard is almost identical to the NP8165’s keyboard; it uses scissor switches, it has a number pad, and features customizable RGB lighting. There are three areas of RGB illumination: left, right, and number pad. There are also four different brightness levels. Unlike the NP8165, the NP6852 will flex when you type. Even with light strokes, the surface will bend backward.

The NP6852 also has a similar trackpad. The trackpad is non-clickable and uses separate left and right click buttons. The tracking experience is decent, but nothing to write home about. In between the two click buttons is a fingerprint sensor for additional security. Setting up the sensor took less than a minute and makes logging into accounts easy.

To access the interior, you’ll need to remove 17 screws; 13 of the screws are readily exposed and four are hidden beneath the battery. Once the screws are removed, the bottom panel pops right off. The cooling solution consists of separate heatsinks, heat pipes, and exhaust fans for both the CPU and GPU. The coolers only have one heat pipe each, so heat might not be carried from the heatsinks to the exhaust fans efficiently. Above the CPU heatsink you’ll find the two memory slots, and next to those you’ll find the M.2 SSD slot for storage and the Intel Dual Band Wireless-AC 8265 for networking. Next to the GPU’s exhaust fan you’ll find a 2.5" SATA slot, which is unoccupied in our configuration.