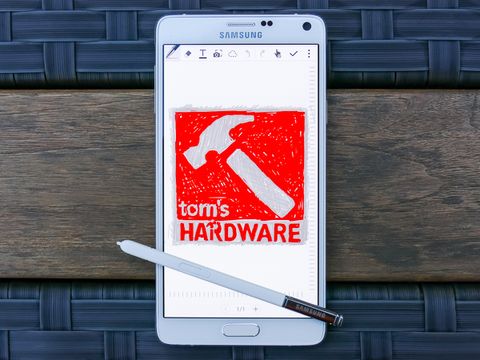 If you’ve owned or used any of the Samsung Galaxy S phones over the last several years, the Galaxy Note 4 will be familiar, though there are some fit and polish changes. The aluminum frame, modeled after the Galaxy Alpha with slightly indented and flattened sides that make it easy to grip, has a painted matte finish that matches the color of the phone, either white or charcoal grey. This finish is very durable, since over the months that we have been testing the Note 4 it hasn’t worn or scratched off. The edges of the metal sides are beveled and polished, giving them an attractive chrome finish that accents the Note 4’s design. The edges of the metal buttons on either side, the home button, and the rear camera components also receive the bevel and polish treatment.

In spite of the large display the phone is relatively lightweight, and feels incredibly thin. Because of the height and width of the phone you’ll often find yourself adjusting your grip in order to reach various edges when operating the device with one hand. We tested a white AT&T model and white and charcoal Telus models. Both colors have a leather-like texture on the back which helps maintain a hold on the phone while changing your grip. However, the white model’s texture has a slightly different, smoother feel when compared to the charcoal. This is likely to make the white finish more impervious to dirt and grime.

The top of the Galaxy Note 4 features a 3.5mm headphone jack, located toward the left of the device as it’s facing you. A slight bump on the back of the top edge is a result of the width of the headphone jack. The right side houses an Infrared LED, which allows the device to function as a remote control in conjunction with an app. A microphone used for the speakerphone and noise cancellation is also located on the top of the device.

The face of the Galaxy Note 4 is dominated by the 5.7-inch QHD Super AMOLED display which spans nearly the entire width of the device. There's an RGB LED in the top-left corner, cleverly hidden when not in use, which provides visible feedback of pending notifications and charging status when the screen is off. Centered above the screen is the phone earpiece and a chrome Samsung logo. The 3.7MP front-facing, wide-angle camera is located in the top-right corner above the display.

Note: The charcoal model has a screen protector applied.
Centered below the screen is the home button/fingerprint sensor, the only physical button on the face of the device, with Samsung's classic arrangement of capacitive buttons to either side—recent apps on the left and back on the right. The bezel to either side of the display is minimal in order to keep the device width manageable, while the bezels above and below are large enough to accommodate the navigation buttons and sensors, as well as providing something to grasp when using the device in landscape mode. The bezel has a pattern of horizontal lines below the glass, adding a bit of a textured look to the front of the phone.

The metal volume rocker is located toward the top of the left edge and either end of the rocker is raised slightly to facilitate controlling the volume by feel. The rocker gives an audible and tactile click when the button is fully pressed.

Around back, the plastic rear cover retains the faux leather look seen on the Note 3, but ditches the over-the-top stitching around the perimeter. The 16 MP camera is housed within a square hump, with a rounded rectangle containing the LED flash and tricorder-like sensors for measuring your heart rate and blood oxygen levels as well as a sensor for measuring the UV level in sunlight. The lone speaker sits in the lower-left corner, which is not our preferred location. Other markings on the back are device specific and may include the Samsung logo, carrier logo, or Galaxy Note 4 branding.

The Note 4 has a removable rear cover which exposes the 3220 mAh battery, a microSD slot which accepts up to 128GB cards, and a slot for a micro-SIM card. This feature should be especially appealing for people looking to upgrade from an older Galaxy S phone who do not like the redesigned Galaxy S6. Unlike the S6, however, the Note 4 does not natively support wireless charging, although the Qi standard can be added with optional Samsung rear covers and cases.

Gone is the Note 3's USB 3.0 port, replaced by the more common but slower microUSB 2.0 variety centered on the bottom edge. The smaller port is bracketed by two microphones. The S Pen docks in the holder located on the right side of the bottom edge.

The S Pen stylus that comes with the Note 4 uses Wacom technology, so does not require any power source. It is pressure sensitive, which makes it a great tool to use with drawing applications that support this feature, such as the included Samsung S Note app and Autodesk’s SketchBook Pro. There is a button on it too, which is used to bring up the radial "Air Command" S Pen action menu and perform other actions with the pen such as selecting text. Compared to the Note 3’s S Pen, the Note 4’s is slightly larger and has double the pressure sensitivity—2048 pressure levels versus 1024.

The Galaxy Note 4 ships with a USB charger and a microUSB cable. The included charger uses Samsung’s Adaptive Fast Charging technology (compatible with Qualcomm's Quick Charge 2.0), that gives you 50% battery capacity in only 30 minutes and 100% capacity in just under 2 hours.

Samsung’s S-View Flip Cover cases have a window which allows viewing and interacting with a portion of the display when closed. Some of these actions include the ability to respond to incoming phone calls, take pictures, or use the heart rate sensor. Thanks to the SAMOLED display, only the visible portion of the screen is powered on when the cover is closed saving power. S-View cases for the Galaxy Note 4 retail for $49.99 and come in Charcoal Black, Frost White, Bronze Gold, and Plum Red.

Another unique case for the Note 4 is Samsung’s LED cover. At first glance, it looks like a traditional windowless flip cover, but it actually has embedded low-power LEDs in the front that light up. They are used to show you various information such as the time, music info, and notifications about messages and missed calls. The LED cover comes in Charcoal Black, Bronze Gold, and Plum Red and retails for $69.99.

If you want to add Qi wireless charging to the Note 4, you can buy replacement back covers that add this feature for $34.99, or a version of the S-View Flip Cover with Qi charging for $69.99. You’ll need a charging pad to use wireless charging of course, and Samsung sells one for $49.99.