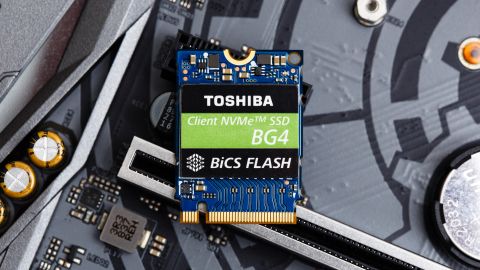 With performance that is 4 times that of any SATA SSD, yet a footprint that can take up just 16 x 20 mm, the BG4 is a great option for OEM computer integration.

One tiny, but speedy SSD

First introduced at CES this year, Toshiba Memory’s BG4 is one of the tiniest SSDs we have ever gotten our hands on, but while it is small in size, it is a rather big improvement over the previous generation BG3. This stems from multiple factors, including the integration of 96L BiCS4 TLC, the doubling the PCIe lanes, and a boost in capacity. All of which result in significant improvements to overall performance and efficiency. Not to mention, the 512GB model has gotten even smaller.

The BG4 aims to be the perfect fit for a variety of applications such as mobile, IoT devices, and server boot. But it won’t be coming to a store near you, not as a standalone retail product at least. As the company’s 4th generation ball grid SSD, the BG4 is designed for OEMs to take advantage of the small size in their end-devices. Unlike most M.2 SSDs in the market these days, this little guy comes in a surface-mount single package M.2 1620 BGA form factor or a removable module M.2 2230 single-sided form factor, both being quite space-conscious designs.

However, with such a small footprint, there is barely room for anything more than a single package on the PCB. That’s why the company built the controller and flash built into the same package, but that also left no room for DRAM, which typically improves performance. Instead, the Toshiba Memory’s BG4 leverages NVMe’s Host Memory Buffer (HMB) feature to make up for a lack of DRAM, which also aids in reducing Bill of Materials (BOM) costs during manufacturing. With HMB, the device can utilize the host system’s DRAM resources as its own but don’t worry, it will only account for a 64MB portion, which is insignificant by today’s standards.

Even though it lacks DRAM and is so tiny, this little SSD still packs quite a punch. It communicates with the host over the NVMe 1.3b protocol and thanks to its PCIe 3.0 x4 interface, sequential performance figures hit upwards of 2.3/1.3 GBps read/write and 4K random numbers reach 390,000 / 200,000 IOPS read/write at its highest capacity. With stats like that, it will be sure to keep up with most consumer workloads, to say the least.

Capacities are available from 128GB up to 1TB. At the high end, that means capacity doubled over the previous generation. The company doesn’t have an explicit warranty or endurance coverage, as those will depend on the OEM selling you the end device, however. Optionally, the company offers TCG OPAL 2.01 compliant SED models for added security.

As mentioned earlier, the BG4 comes in either an M.2 1620 single package BGA form factor or M.2 2230 single-sided form factor, like we have today in testing. Toshiba Memory managed to reduce the BG4’s Z-height on the 512GB model from 1.5mm to 1.3mm thanks to the higher density 96L BiCS4 TLC. At 1TB, our sample is still 1.5mm, but overall, weighs in at just 2.6g, or under half of what other M.2 SSDs weigh.