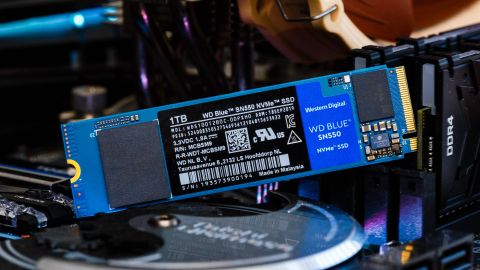 WD’s Blue SN550 is a substantial update to the Blue line-up. It is fast, efficient, and comes into the market at a low cost per GB. We highly recommend it to those looking for a low-cost M.2 drive.

Maybe you want to upgrade the cramped SSD in your ultra-light notebook. Or maybe you just want a reliable and affordable NVMe SSD for your new gaming rig. In either case, WD’s mainstream NVMe SSD that will fit the bill nicely. With performance figures that peak at 2.4 GBps and very low MSRPs, the Blue SN550 offers tremendous value.

Back when we first reviewed the WD Blue SN500, we were disappointed that it wasn’t offered in a 1TB capacity. This may have been to drive up sales on the 1TB and 2TB WD Black SN750. But now the company has released a new Blue SN550 with a 1TB maximum capacity. Aside from a capacity bump, the Blue SN550 packs a few upgrades under the hood, including a faster controller and some of the latest 96-layer TLC NAND flash available.

Furthermore, the write speed is based on the SSD’s write cache. Like most SSDs these days, the WD Blue SN550’s write performance degrades after the write cache fills -- more on that shortly. In terms of random performance, the company rates the SN550 to hit upwards of 410,000/405,000 IOPS read/write.

You can easily secure erase the SN550 if you have a motherboard with the feature to do so built-in. Trim and S.M.A.R.T. data reporting are supported. And with a multi-gear ECC scheme as well as various other standard flash management technologies to aid the NAND flash’s longevity, the SSD is rated to endure up to 600TB of writes at the largest capacity -- if the drive is within its five-year warranty, that is.

WD supports the company’s SSDs by providing end-users SSD toolbox, as well as cloning software. WD’s SSD Dashboard is a well-designed Windows-based SSD Toolbox. It allows you to monitor and analyze your SSD’s health, performance, as well as update the firmware if the company releases one in the future.

Along with the toolbox, Acronis True Image WD Edition is a simple-to-use cloning program that allows you to quickly and easily migrate your data from your old drive to your new WD SSD. It can also be used for creating system images for back up, which can be quite helpful if/when Windows decides to break after a system update.

True to its name, WD’s Blue SN550 comes with a blue PCB, in a single-sided M.2 2280 form factor, so it can fit in even the thinnest of devices. WD’s product team are fairly tight-lipped on disclosing hardware specifics enabling the Blue SN550 to perform how it does, but we managed to narrow things down a bit on our own.

WD designed the controller and firmware that powers the SSD. The Blue SN550’s NVMe 1.4-compliant controller interfaces with the host over a PCIe 3.0 x4 link, a step up from the x2 link the previous SN500 had, which helps performance a bit.

Architecturally, we think the new controller is close to WD's 28nm tri-core NVMe controller on the SN750. But the company cut it down a bit from an 8-channel design to 4-channels, and possibly lowered the core count or are using a smaller manufacturing process node due to its very compact size and low power consumption figures. This translates into a bit less peak performance, but better power efficiency. Plus, a simpler design can help lower the cost to manufacture.

Speaking of flash, WD is shipping the SN550 with SanDisk branded 96L BiCS4 TLC NAND flash. On our 1TB model, there is just one NAND package, filled with sixteen 512Gb dies, located on the opposite end of the PCB of the controller. This is WD’s way of upgrading the thermal design of the Blue for better-sustained performance, as separating the components like this helps to distribute and dissipate heat and prevents heat from one component soaking into the other.