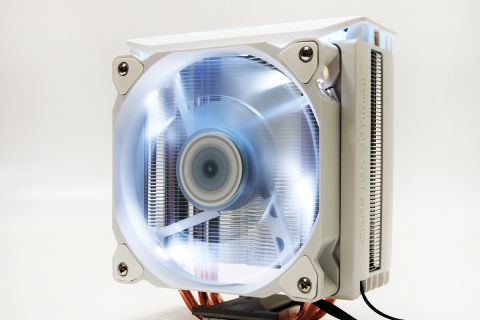 Limited thermal performance caps the appeal of the CNPS10X Optima II. It’s suited mostly to stock-clocked builds with fewer than 6 cores. But note the shroud sits low on the shoulders, making for very low memory DIMM clearances as well.

Zalman has been a cooling mainstay in the PC building community for decades, offering up a variety of coolers, from sculpted, steampunk-esque copper works of art to benchmark-breaking workhorses with simpler designs. While the CNPS10X Optima II bares the namesake of the same parent company, it pales in comparison to the best Zalman products that came before it.

Zalman ships the CNPS10X Optima II with the usual assortment of plated fasteners and tension brackets we’re accustomed to, including a universal backplate, PWM to 4-pin/3-pin splitter cable and a packet of ZM-STG2M thermal compound.

While the CNPS10X Optima II is listed as having RGB lighting, it should be noted that there isn’t an included control module or set of interface cabling for either standalone or motherboard-capable management.

As a quad-heatpipe design with a direct contact base, the Zalman CNPS10X Optima II is similar to other coolers of its type. The aluminum fin stack of the cooling tower provides low resistance to airflow produced from the dual-blade design, 120mm hydraulic bearing fan that’s rated up to 61.5 CFM at 1500 RPM.

An elegant shroud encases the top and each side of the Optima II, while also providing self-tapping screw eyelets for fan mounting. Recesses in the top allow for the embedded RGB lighting to emanate through opaque sections of the shield.

As previously mentioned, the CNPS10X Optima II is RGB capable. However, illumination comes equipped as a single factory-set ‘spectrum lighting’ pattern that is powered exclusively by the fan header. In short, this means the RGB effects for the fan is always on, although one could opt to leave the top-shroud lighting module disabled by choosing not to connect the 3-pin (fan type) pigtail for it.

As a direct-contact heatpipe solution, the Zalman CNPS10X Optima II mates the handsome, brushed base of the cooler with the milled heatpipes into the mounting block. The contrast of metals around the cooler base provides an elegant, highly-engineered look, while the shark-fin plastic tabs of the lower cooling shroud (on each side) provide clear indication to the origins of our memory DIMM clearance concerns.

Installation of the mounting brackets requires some PC hardware gymnastics in the form of unscrewing both sides of the mounting base’s fasteners, while not completely removing them. This allows the base plate bracket slack on each side to slip the tension brackets over two alignment tabs on either side, while aligning gaps in the brackets with the fastener screws.

While the alignment tabs do help maintain bracket orientation during the re-torqueing process of the machine screws, there remains a small bit of play in the bracket system, which can require a few attempts at getting this step right. If the brackets are not correctly aligned, securing to the motherboard mounting posts proves a bit daunting.

After the bracket ballet, installation of the Zalman CNPS10X Optima II is relatively straightforward to complete. The self-tapping screws for the fan mounts can require a good bit of force to get started, which also requires some significant pressure (and great care) in order to secure them in place without applying excessive force with your screwdriver inside a PC case.

Our recommendation is to test fit the fan to the cooler prior to installing to allow the fan screws to pre-tap into the shroud first, since the fan cannot be in place when the cooler is initially being mounted to the motherboard. This lessens the amount of lateral force needed to secure the fan’s four mounting screws. But be prepared to still provide support on the cooler’s opposite side. Pro tip: a stubby Phillips-head screwdriver works much better here than those with longer handles.

Clearance was very limited during our installation process and we needed to re-seat the Optima II three times in our attempt to get the cooler shroud low enough on our MSI X99 XPower AC motherboard PWM heatsink to allow the heatpipes to make good contact with the CPU heat spreader. Initially, the shroud was causing the side of the cooler to lift off of the processor while also causing us some alignment issues with the mounting hardware.

A 90-degree turn to orient the heatsink and cooling fan up/down on the Optima II also wasn’t possible as the same clearance issues were also present, but this time, we found installation restricted by our memory DIMMs. Our best course of action was to re-orient the Zalman cooler to its original, vertical (front to back) airflow configuration while being very meticulous in our movements as we anchored it.