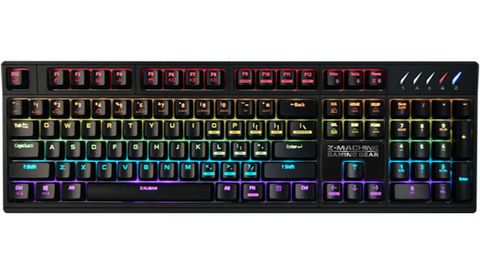 The Zalman ZM-K900M is a reasonably priced keyboard with numerous features for those who want lots of customization and configuration options but don’t want (or care about) software.

The ZM-K900M replaces the ZM-K700M (which we reviewed earlier) as Zalman’s flagship keyboard. Adding in more lighting options and switch choices, the K900M expands on the market that the K700M targeted. The keyboard is still obviously aimed at gamers, with flashy visuals and gamer-typical marketing features such as n-key rollover (NKRO) and a high polling rate, but the addition of clicky (Blue) and tactile (Brown) options may actually please gamers disappointed at the Cherry MX Red-only K700M.

Although in many ways the same, the K900M also includes some small (and big) changes, including a case redesign. The relatively restrained look of the K700M had been replaced by a more aggressive-looking, gamer-oriented design. The suggested retail price ($100) is actually lower than that of the K700M ($139).

Being Zalman’s flagship keyboard, a fair amount of extra features are present. Apart from fairly standard options such as media shortcuts, shortcuts to applications and websites (including, somewhat strangely, Zalman’s own website), volume controls, and a gaming lock, the K900M also features an adjustable repeat rate, a PS/2 option (via the included adapter), and eight programmable macro keys. These macro keys offer several customization options such as an adjustable output rate (so keys can be reproduced at the same speed as entered or faster), and even the option to include right and left mouse buttons and the clickwheel into the macros.

Note that there are no separate buttons for any of these features; all are present on a function layer over the keyboard’s normal keys, shown as tertiary legends.

As we found with the K700M, the manual included with the keyboard is useful for discovering all the features (and mandatory for understanding all the sub-legends), but, again, several features (in this case the email, media player, and calculator shortcut buttons) never worked.

An old-fashioned, but very useful feature is the inclusion of a cable gutter that can lock the cable in one of five positions. This means that the lead will be much less in the way and will not flop around as much. On a personal note; I wish more manufacturers would re-introduce this feature on their keyboards.

Next Page Switches, Lighting & Key Caps
14 Comments Comment from the forums
Be In the Know