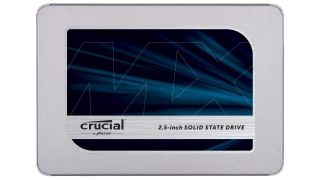 Pure, 100 per cent solid-state computing. Long the holy grail, now actually affordable thanks to the likes of the Crucial MX500 1TB SSD. It's currently available on Amazon for just $99 and within a few bucks of its lowest ever price. Strictly speaking it's not a time-limited deal, but it's still something of a steal.

Just turning two years old, the Crucial MX500 originally launched in early 2018 with a retail price of $259 for this 1TB model. So it's now available for well under half price. With fully 1TB of capacity, it opens up the possibility of mass storage using solid-state technology.

Granted this is a SATA SSD rather than an M.2 drive using the much speedier PCIe interface. But with reads and writes in excess of 500MB/s, it's still miles faster than a mechanical hard drive. It's the perfect upgrade for an aging laptop or a budget desktop build.

Crucial MX500 1TB SSD: Now just $99
Give your tiring laptop a serious boost or that budget desktop build a remarkable amount of solid-state storage with this tried and tested SATA drive from one of the best brands in SSDs. Comes complete with a five-year warranty.View Deal

Admittedly, for the most demanding users, 1TB isn't going to be enough storage. But if you're on a budget or for a secondary system or laptop, it should be plenty. It's enough for a reasonable game library, plus a decent selection of movies for the plane.

What's more, even by today's standards the MX500 has some decent specs. It uses TLC rather than QLC memory and packs fully 1GB of DDR cache memory, so its sustained performance is excellent, even when writing hundreds of GB of data. Crucial also includes a generous five-year warranty and rates the drive for 360TB of writes, so it should be good even for the most demanding workloads, like torrenting.

If you're after something bigger or smaller, faster or even cheaper, check out the best of the rest of our current tech deals.