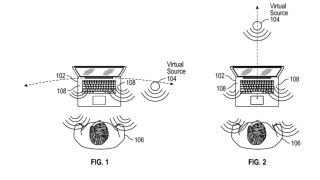 Laptop speakers rarely impress. There's only so much a manufacturer can do to make them sound good, after all, and most people probably use headphones anyway. But the U.S. Patent and Trademark Office (USPTO) revealed on Tuesday that Apple has patented a new audio system to improve its MacBook speakers.

Part of the problem with laptop speakers is their proximity to each other. Many people are used to hearing things via stereo audio, especially since headphones and earbuds became so popular, but laptop speakers are often too close to clearly separate audio that's really only meant to be heard from one side or the other.

Apple's patent covered a virtual acoustic system that's supposed to address that issue. Rather than simply emitting sound from its speakers, a MacBook equipped with this technology would be able to make it seem like the sound came from somewhere else, almost like a technological ventriloquist. Apple said in the filing:

"A virtual acoustic system is one that gives the user the illusion that sound is emanating from elsewhere in an indoor or outdoor space than directly from a loudspeaker (e.g., one that is placed in a room, one that is built into a laptop computer, etc. Audio signal processing for virtual acoustics can greatly enhance a movie, a sports even, a videogame or other screen viewing experience, adding to the feeling of "being there". Various known audio processing algorithms, executed by digital processors, modify one or more recorded, synthesized, mixed or otherwise produced digital audio signals in such a way as to position a virtual source according to modeling that is based on human perception of sound, including the role of ear acoustics, other reflecting and absorbing surfaces, distance and angle of source, and other factors."

That process can be more complicated than it sounds. Like we mentioned above, headphones and earbuds have the distinct advantage of only being heard from one ear at a time. Laptop speakers don't have that advantage. Apple said its system is supposed to change that by using a crosstalk canceler and multiple audio signals:

The patent covered numerous configurations of this virtual acoustic system that change how the crosstalk canceler is used--or if it's used at all--and how each of the paths are utilized. Check out the patent for more information on how Apple conceived of the system and what forms it might take in a real product.

Apple filed the patent application, titled "System to move a virtual sound away from a listener using a crosstalk canceler," in August 2018. USPTO granted the patent on New Year's Eve. That means it could be a while before this system appears in a MacBook--assuming that Apple plans to continue developing it at all.