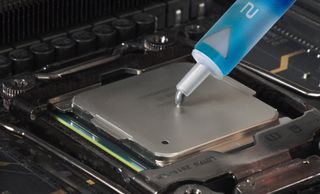 EVGA has expanded way past its graphics cards origins, with its offerings now including motherboards, PC cases and power supplies. This adventurous spirit also extends into the cooling arena, and the vendor just announced its new thermal interface material (TIM), otherwise known as heatsink paste, CPU paste, thermal grease, or whatever you like calling it. EVGA is calling it Frostbite 2. Seemingly, the company had enough success with the original Frostbite to give it another go, and DICE isn't giving them too much trouble over the name.

Frostbite 2 looks to be just another thermal interface, with similar workings and application instructions as most other TIM: drop a pea-sized amount on your CPU and wham your best CPU cooler onto it. It also works with graphics cards.

EVGA notes a thermal conductivity of 1.5 W/mK and thermal resistance of 0.035°C-cm²/W. Each syringe comes with 2.5g of material, and the material weighs 3g per cubic-centimeter. It can operate between -40 and 180 degrees Celsius.

When it comes to thermal pastes, there are so many choices that it can be hard to tell which to get. At the end of the day though, unless you're going for liquid metal, a graphite pad, toothpaste, or dabbling in heavy overclocking, the decision typically doesn't make earth-shattering differences.

In that sense, if this paste is readily available at your distributor and you need some, it's currently selling for $7.99.