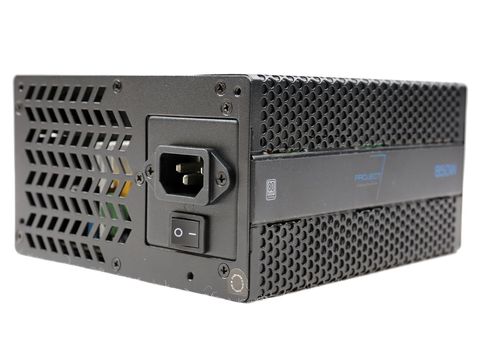 Using results from the previous page, we plotted a chart showing the ACP-850FP7's efficiency at low loads, and loads from 10 to 110 percent of its maximum-rated capacity.

Compared to the high-end Corsair competition, which sports the same efficiency certifications, Aerocool's ACP-850FP7 fares well. It comes close under normal loads and takes a significant lead in light-load situations.

In the following tests, we measure the ACP-850FP7's efficiency at loads significantly lower than 10 percent of its maximum capacity (the lowest load the 80 PLUS standard measures). The loads we dialed were 20, 40, 60, and 80W. This is important for representing when a PC is idle, with power-saving features turned on.

Under light loads, the ACP-850FP7's efficiency levels are jaw-dropping. With only 20W of load, our efficiency measurements exceed 75% while other "efficient" PSUs struggle to get above 70%.

Of course, the fan isn't active under such light loads, so noise is negligible. Our test sample didn't exhibit any coil whine, either.

The 5VSB circuit's efficiency is acceptable, though it can't compete with CWT's implementation.

The next chart shows the cooling fan's speed (again, in RPM) and output noise. We measured acoustics from one meter away, inside a hemi-anechoic chamber. Background noise inside the chamber was below 16.6 dB(A) during testing (it's actually much lower, but our sound meter’s microphone hits its floor), and the results were obtained with the PSU operating at 37°C (98.6°F) to 47°C (116.6°F) ambient temperature.

Most of the time, the ACP-850FP7 remains in passive mode. That seems weird for an 850W PSU, but apparently high efficiency makes this possible without compromising reliability.