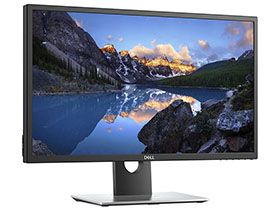 At this writing, the UP2718Q is a unique display and we have nothing like it in our review database. The closest comparison we can make is to VA-based panels, which offer much higher native contrast than IPS or TN. Today’s group includes AOC’s AG352UCG, U3277PWQU, and C4008VU8, along with Acer’s Z301C, and Dell’s S2718D, which also supports HDR10.

When processing HDR signals, the UP2718Q’s backlight is in full zone-dimming mode, which means the 384 individual LEDs can be made darker or brighter according to content. When measuring a full-field pattern in SDR mode, we saw a peak output of 360.2752cd/m2, which is typical for an IPS panel. In HDR mode, we used a 10% window pattern and recorded over 1100cd/m2.

This superior performance extends to black levels that are VA-like in HDR mode. The UP2718Q is blacker than all the VA screens here except the C4008VU8, which has a dimmer backlight. That makes for an amazing sequential contrast result of more than 17,000:1. SDR contrast is a decent 1016.9:1, putting it near the top of the IPS heap.

It should be noted that the best plasma displays, before their unfortunate disappearance from the marketplace, were capable of contrast ratios exceeding 50,000:1. We still have a Pioneer PRO-111FD panel from 2009 that can achieve this in our lab. And LG OLED televisions have an even broader dynamic range with unmeasurable black levels. While zone-dimming is a major enhancement to LCD technology, it still comes up short of OLED and plasma in the native contrast department.

The backlight goes to a low level with a 31.0169cd/m2 minimum and 960:1 contrast. This is reasonably consistent but not quite as much as many other panels we’ve reviewed. We also noticed the backlight doesn’t modulate evenly. Some clicks of the slider produce changes of more than 10cd/m2 while others register no change. Setting a precise level is difficult, but we were able to hit 200nits for our calibrated tests.

Since we didn’t perform a full calibration, the above charts represent the sRGB preset with brightness set to 56%. Black level and contrast performance is consistent with the premium IPS panels found in professional monitors. In SDR mode, the UP2718Q is a capable display with good contrast and excellent picture quality, mainly thanks to its high pixel density.

We performed the ANSI test in both SDR and HDR modes, using a checkerboard pattern that represents an average picture level (APL) of 50%. As you can see, the UP2718Q can’t quite hit 1000nits in this case. Peak readings ranged from 420 to 460cd/m2 while black levels were around .34cd/m2. This provides a bump in intra-image contrast but not a significant one. This shows how the zone-dimming system works in concert with the content’s APL. As the percentage rises, dynamic range shrinks. When we measured just a 10% white window, we got the full 1100nits output.

In SDR mode, performance is again like other premium IPS monitors but well below the VA panels in the group. For native contrast, VA is still king, but without a zone-array backlight, it lacks the ability to match the high specific output levels of the UP2718Q. When those two technologies come together in a single desktop display, that will be a glorious day.