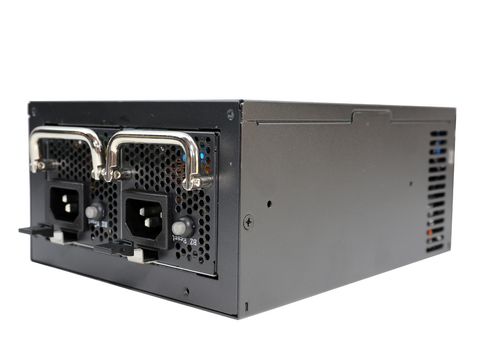 To generate the following charts, we set our loaders to auto mode through our custom-made software before trying more than 25,000 possible load combinations with the +12V, 5V and 3.3V rails. The load regulation deviations in each of the charts below were calculated by taking the nominal values of the rails (12V, 5V and 3.3V) as point zero. The ambient temperature was between at 28°C (82.4°F) to 30°C (86°F).

This is clearly not our normal efficiency graph, where readings should normally register a peak under typical (40%-50% of the max-rated-capacity) loads. This is because both power modules work in parallel, offering better efficiency under high loads. However, under low and moderate ones, the combined power losses of both modules lead to lower efficiency.

The frame's DC-DC converters get quite hot when they're taxed. Fortunately, the modules' cooling fans do a decent job according to our thermal shots.