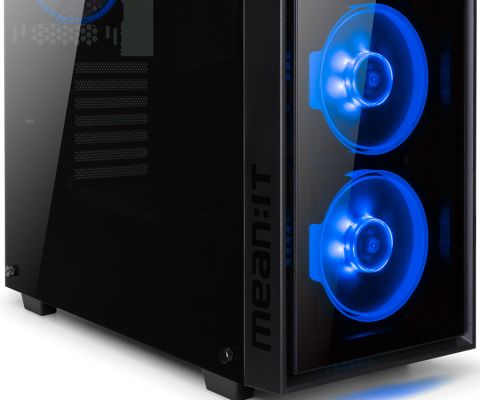 The first thing you may notice about the benchmark charts is that all the other cases were tested in two configurations: The Crystal 460X ran so cool that we were able to retest it with the fans turned down manually. The Cullinan ran so cool that retesting at its low-fan setting made sense. And while the CASE-V08 didn’t have a fan controller, it did have a panel spacer kit to move the glass away from the fans.

Unfortunately, the 5PM ran too hot at full fans to leave any room for a low-speed test. In fact, we had to lower our ambient temperature near freezing just to complete the stress test. Placing a hand behind the exhaust fan revealed the problem: there was little airflow past the CPU.

Noise levels for the high fan settings are very similar between the two most similar cases—the 5PM and Cullinan. The Cullinan’s fan were mounted differently with much more distance behind the face glass, but that appears to have impacted airflow far more than noise.

A combination of poor cooling and mediocre noise drags down the 5PM in our Acoustic Efficiency chart. The far-more-vented Crystal 460X proves awesome (for a hefty price), while the Cullinan shows what the 5PM might have been with different fans and mounting methods.

Would any serious budget builder scrimp $10 to get the CASE-V08, with its single USB 3.0 port, lack of EATX support, and cheaper overall construction? I’d find it more likely to see a builder attempt to re-position the 5PMs fans into the Cullinan’s configuration, since the chassis are so similar, and thereby lose the 5PM’s likely hindrance of having its fans too close to the glass. Or, as discounts swing between brands, perhaps you’ll one day find the Cullinan cheaper than the 5PM.