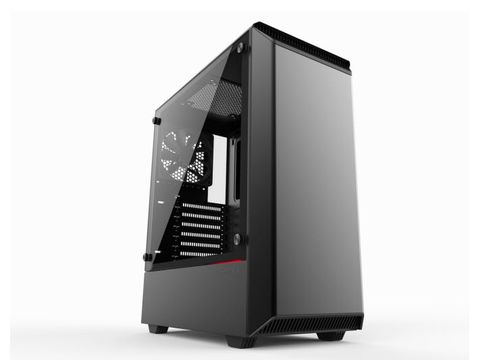 [Note: This is a different test platform from the one used in our other ATX case reviews, so we re-tested the BitFenix Nova to keep the comparison fair. This is indicated by the "test #2." Readers who are good with numbers should be able to make comparisons that way between the cases tested here, and those tested at our other lab.]

As you might expect from a chassis with a single 120mm exhaust fan and a tempered glass side panel, the Eclipse P300 performed poorly during thermal testing.

Thanks to the tempered glass side panel, a front fascia with no forward-facing vents, and a single case fan, this chassis generated very little noise at just 33.4dBA under load. At idle, the Eclipse P300 was extremely quiet at 29.6dBA.

Determining acoustic efficiency, also referred to as cooling-to-noise ratio, is a matter of averaging all five of our tests to determine a base value. Phanteks Eclipse P300 generated very little noise partly by eliminating intake fans. Sure the tempered glass side panel helps, because it reflects sound back into the chassis, but we believe the the addition of one or more intake fans would almost certainly negatively impact these acoustic results.

Unfortunately, the higher temperatures compromises the Eclipse P300's value score in our performance-to-price comparison, despite its low asking price. Its competitors also have low asking prices. And they also perform better.

Our value results are a bit misleading, even now. Most people who buy this chassis will undoubtedly want to add at least one or more intake fans to the system build. Obviously, that is going to add cost. And while those fans will enhance cooling performance, it will come at the expense of overall system noise. If Phanteks were to add a fan and hold the price steady, it might be hard to pass up. For now, there are better choices.