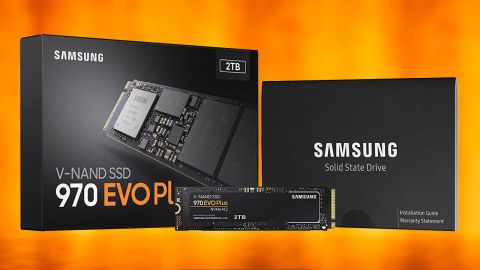 Performance between the MyDigitalSSD BPX Pro and 970 EVO Plus is very similar, but the BPX Pro's new firmware has given it a slight edge. The 970 EVO Plus beats its predecessor by over 100MB/s during the bandwidth test.

Load times have improved as well. The new 970 EVO Plus beats out the non-Plus by more than a second and the 860 EVO by over two seconds.

The EVO Plus also leads our read performance test, notching a 100 MB/s gain over its predecessor.

The 970 EVO Plus installed Sysmark in 894 seconds, which technically ranks in third place behind the BPX Pro and Intel Optane SSD 905P. There's only a three-second gap between the three drives, so the competition is close enough to call a tie.

The 970 EVO Plus beat the other drives in SYSmark's responsiveness score and comes surprisingly close to matching the Optane 905p. We also see a 25-point improvement over the standard 970 EVO. Overall, Samsung's EVO Plus proves to be a snappy drive.

The 970 EVO Plus is significantly faster than its predecessor in these synthetic read and write tests. Here the drive hit nearly 3.6GB/s during the read test and 3.3GB/s while writing data. Write performance proves to be the 970 EVO Plus's strong suit: it maintained a huge 1.2GB/s lead over the nearest competitor.

Samsung’s 970 EVO Plus leads during the Anvil’s Storage Utilities testing. Thanks to its blistering write performance and improved read performance, the EVO Plus beats the nearest drive by over 2,600 points.

The 970 EVO Plus outperforms the competition during sequential tests, but random read performance is another story. The 970 EVO Plus has been far ahead of the standard 970 EVO in previous tests, but the EVO beats the Plus in the random write tests at a queue depth (QD) of 8. The EVO Plus does eke out a substantial lead over the rest of the test pool during the all-important random write test at QD1, which equates directly to system snappiness.

Samsung rates the 970 EVO Plus’s performance at up to 19K/60K read/write IOPS at QD 1, but we only achieved 13K/47K IOPS in our system with the Meltdown and Spectre firmware and software patches applied.

As expected, Samsung’s Intelligent TurboWrite runs out after 24GB of data has been written at a rate of 3.1GB/s, then performance degrades to about 850-900MB/s. While this is much lower than the TurboWrite speeds, it is actually much faster than competing products and in line with Samsung’s official specifications.

New SSDs are becoming more power efficient, and as expected, the Samsung 970 EVO Plus’s efficiency has improved, too. Just not by much.