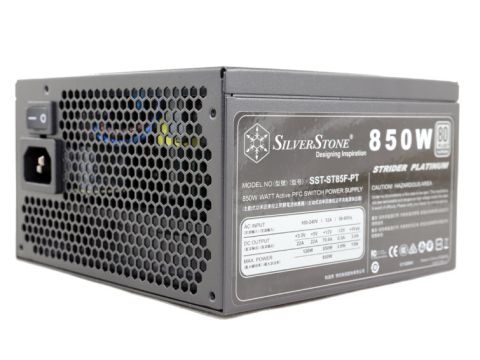 An 850 W, 80 PLUS Platinum-rated, and fully modular PSU that measures just 14 cm deep is truly noteworthy, that's for sure. The ST85F-PT is a fine example of SilverStone's commitment to down-sizing the dimensions of its power supplies. Sirfa delivers an efficient platform with decent overall performance, despite those size restrictions.

The cherry on top is quiet operation, which couldn't have been easy to achieve given a 120 mm fan. Most of the time, smaller fans make more noise in their quest move the same amount of air. But compact PSUs like this one don't have room for a 140 mm fan. That's why we're impressed with the ST85F-PT's ability to stay around 40 dB(A) while other models sporting 120 mm fans approach 50 dB(A) readings. Besides high efficiency, quiet operation, and compact dimensions, the ST85F-PT's other advantages include fully modular cabling, an FDB fan that should last a long time, and high-quality filtering capacitors enabling satisfactory ripple suppression.

Unfortunately, Sirfa, the manufacturer of this PSU, doesn't seem to like long hold-up times (probably because bulk caps don't come cheap). On top of that it is affected by the "fake" Power OK signal disease, since this signal lasts longer than the corresponding hold-up time. This simply means the PSU reports a power-good signal to the system's mainboard while its rails are lower than the minimum thresholds set by the ATX spec. This isn't good for the voltage regulators of various system components, and that's why there's a voltage regulation range set by the ATX specification. We really hate to see "fake" power-good signals because they reek of deception. It's as simple as using the proper bulk capacitor able to offer at least 17 ms of hold-up time and making the power-good signal drop at least 1 ms before.

Besides the hold-up time issue, we also noticed that this PSU's semi-passive mode isn't set properly and needs to depend more on the internal temperature rather than the applied load. An NTC thermistor and bypass relay would be a highly welcome addition to the platform. We cannot understand why an inexpensive part like an NTC thermistor, which serves an important function, is missing from a high-end power supply like this one. If Sirfa was worried about the efficiency impact, a bypass relay would have taken care of that. Finally, it would be nice if there was a fan test button, or at least if the fan spun briefly during the PSU's start-up phase, allowing you to confirm it's working properly.

Prev Page Performance, Performance Per Dollar, Noise And Efficiency Ratings
6 Comments Comment from the forums
Be In the Know