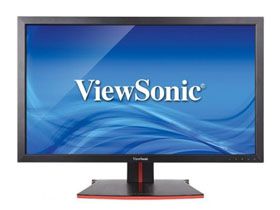 While the XG2700-4K's viewing angles beat any TN panel, it's not quite in the league of an AHVA panel like the Asus PG279Q when it comes to off-axis image quality. There is a visible red shift to the sides with a roughly 40-percent light reduction. Detail is properly retained, however, as there is little change to gamma. From above, the image washes out more and shifts to blue. Again though, there isn't too much loss of detail.

We didn't bother to test the effects of uniformity compensation here because it's simply not a viable option. Not only does it reduce contrast significantly, it's obviously not necessary. Our sample had no visible light bleed whatsoever. In fact, it measured better than the majority of monitors in our database.

The white field uniformity result is even better with a low percentage of 3.69. Only a couple of monitors have been able to best the XG2700-4K in this test.

We noticed a slight green tint in the lower right corner of our sample, which spoiled the color uniformity result. Here the compensation has a marked effect by completely removing the flaw. We couldn't see a problem in actual content and other samples will measure differently from ours.

With over eight million pixels to manage, you won't find a high refresh rate here. 23 milliseconds is fairly typical among 60Hz IPS displays regardless of resolution. The two TN panels are able to draw a bit quicker giving them slightly lower motion blur.

TN generally offers lower input lag than IPS but it's not an absolute. Internal processing and component selection will make a difference. Obviously, the Monoprice is not designed as a gaming monitor and the Acer XB280HK clearly is. The XG2700-4K manages to occupy the middle spot between those two. The top three are all high speed QHD displays so their numbers are expected.

With any Ultra HD monitor, performance is hampered not only by the sheer number of pixels in motion but by the 60Hz refresh rate. The XG2700-4K is further limited by a 40Hz lower FreeSync limit before V-Sync, or tearing, takes over. Our R9-285 equipped system is a little light on power to take full advantage of a monitor like this. Given its selling price, we'd expect most users considering this ViewSonic to have more processing ability in their systems. But we loaded up our copy of Tomb Raider and gave it a shot.

This game is not super-demanding and it's not a hair-trigger experience like Battlefield 4 or Crysis 3. So things like input lag don't have as great an impact on gameplay. We initially tried leaving V-Sync off to confirm the effects of dropping below 40fps. Tearing was immediately apparent when this happened. Even with detail on High, we couldn't prevent the occasional dip in speed. Turning V-Sync on alleviated the artifact and we couldn't see any increase in input lag.

We were also happy to see a complete lack of ghosting when using the overdrive's Ultra Fast setting. Of course at 60Hz there isn't a huge drop in motion blur but there is a slight improvement in motion quality. We were able to leave it engaged regardless of what game or content we viewed.

Potential buyers will have to consider their video card's limits and what titles they plan to play when shopping the XG2700-4K or any other Ultra HD monitor for that matter.