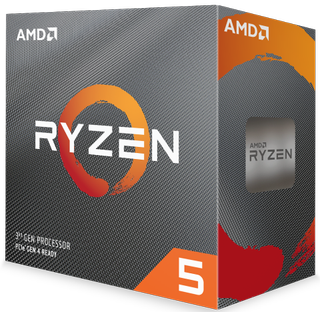 Specifically, it's $24 off the 3600's normal pricing of $199. For that you get the aforementioned six cores running at a healthy baseclock of 3.6GHz and turboing up to 4.2GHz. For most computing tasks, most of the time, including a lot of games, you could chuck any amount of additional CPU power into a PC and not notice the difference, subjectively. This six-core chip with AMD's Zen 2 architecture has you covered.

Other details include a healthy 32MB of L3 cache and, of course, support for PCI Express 4.0. The latter is a feature that isn't available on any Intel CPU, at any price, and enables the highest possible speed and performance with peripherals and add-in components such as SSDs.

What do you get?

It's also worth noting that this is the full retail proposition too, not an OEM product. So it comes boxed and complete with AMD's Wraith Stealth cooler. It's arguably not the most effective CPU cooler in the history of humanity. But it's plenty good enough for running at stock clock speeds and will help keep costs in check if you're embarking upon a full build.

Given that AMD's Ryzen processors aren't renown for their overclocking prowess, even with high end coolers, it's debatable whether you need anything better in the heat sink and fan department, in any case.

In the unlikely even that this deal doesn't do it for you, check out the rest of our CPU and PC component deals and good luck!