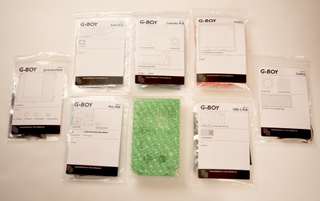 Made available for pre-order last week on the BitBuilt console modding store, the G-Boy Rev III is a $325 DIY kit for converting a Wii into your own handheld, Game Boy shaped console, and the first product of its kind to hit the market. Aimed at providing beginners with an entry point into console modding, this kit includes a 3D printed case (with all required screws, parts and contacts), as well as a 3.5” LCD VGA display, a heatsink and blower fan, custom analog sticks and shoulder buttons, custom speakers, and several custom PCBs and other parts to make rehousing your Wii as easy as possible. The goal here is to innovate on console modding by offering newcomers an approachable entry point to get into the hobby.

Endorsed by PiiWii Pocket and Altoid Tin Wii creator Shank Mods, this kit essentially aims to be a next step-up for Raspberry Pi handheld builders, assuming they have the required tools. While portable console modding has been a thriving community for years now, the need to custom build or modify new PCBs, buttons, and cases for each individual project has made it a difficult space for beginners. The G-Boy does still require manual skills like soldering, but with its selection of custom parts as well as build guides, BitBuilt is hoping it can fill the entry level niche by offering the community’s first complete unified modding standard.

But why convert an existing console to portable when Raspberry Pi exists and you can use emulation platforms like RetroPie.? “These are not emulators,” Shank Mods explains in his video introducing the G-Boy kit. “There are real Wii motherboards inside these portables...allowing it to play all GameCube and Wii games perfectly.”

However, the G-Boy does offer more than native iso support for Wii and Gamecube. Shank Mods elaborates “Wii portables also run Wiiware and virtual console games, as well as the Wii’s massive homebrew library and selection of homebrew emulators.” Taking a shot at Raspberry Pi, he then adds “Wii portables are everything Raspberry Pi portables wish they could be.”

Up until this point, converting a Wii console into a portable has meant cutting up an existing Wii to salvage not just its motherboard, but also all of the PCBs for its controller, audio, video, and the like, as well as building your own case and sourcing your own speakers, charging solutions, and anything else not actually built into the console. The G-Boy rectifies this by only requiring you to supply a Wii motherboard, some of your own Nintendo DS Lite buttons (which you can buy in packs for about $7 on eBay), and two of your own rechargeable 18650 lithium batteries (which BitBuilt had difficulty stocking due to restrictions on shipping lithium batteries, but which can be bought on Amazon for about $30). Everything else you need, aside from tools and the MicroSD card you’ll be storing games on, is already in the box.

The G-Boy also comes with a number of software solutions to make the project easier, like a custom front end UI for loading your games without needing a Wii remote, as well as an app for calibrating any control stick for working with the console.

Still, the G-Boy is nonetheless a project. The store page recommends owning or buying a soldering iron with good temperature control, a hot air station, a dremel, an x-acto knife, tweezers, wire cutters and strippers, and a number of screwdrivers before starting your build. You’ll also need your own wire, solder, and flux.

“This kit is by far the easiest way to get into building a portable, but that does not mean it is easy,” Shank Mods explains in his video on the G-Boy. “It’s a challenging build, even for beginners, but with enough dedication, even a beginner can build their own G-Boy.”

However, the G-Boy’s creators are also in the process of creating a complete step-by-step guide for the project, which will come with the kits and also release online within a few weeks, according to BitBuilt’s forums.

The same thread also confirms that the kit is set to release “very soon in April.” If you, like me, have been wanting to turn one of your old, unplugged consoles from a paperweight into something you can get some more use out of, plus learn more about electronics along the way, this kit looks like a great way to get started.