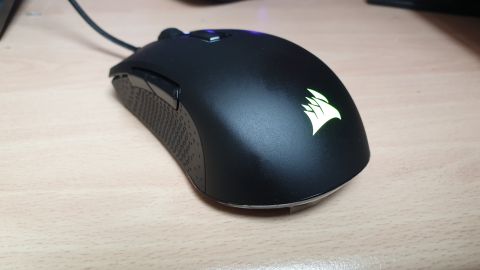 The Corsair M55 RGB Pro is a great budget mouse for twitch shooters and games where fast response times are everything.

Corsair markets the M55 RGB Pro as a mouse that should appeal to any gamer, no matter if they’re left or right-handed. With a design that lets you take advantage of its supple form in either style of play, it’s a mouse that, from the outset at least, looks to be more than comfortable for even the longest of gaming binges.

There’s no fuss here, no gaudy shapes, or ridiculous illuminations, despite the RGB. It’s a refined take on what a mouse should be. Yet, to those that see the gaming mouse as an essential bit of hardware that can mean the difference between victory and defeat, the M55 RGB Pro may seem somewhat uninspired.

Despite its simplistic design, there's a lot of intuitive features tucked away here that can make the M55 RGB Pro a worthwhile addition to any gamer’s arsenal. Take the sensor for example. Corsair’s packing in a PixART PMW3327 optical sensor, which features a max CPI (counts per inch, sometimes called DPI) of 12,400, can trundle along at 5.5 meters per second / 220 IPS (inches per second, or the max velocity at which your sensor can still track those counts) and has a max acceleration of 30 g-force, meaning for a budget mouse, this thing is capable of some seriously high precision, regardless of how quickly you’re tearing it across the desk.

Couple that with a number of customizable buttons and a robust, yet light, design, and you’re left with a mouse, that should turn some budget-seekers' heads.

The M55 RGB Pro at the time of writing has an MSRP of $39.99 / £45, but we're seeing it for as low as $32/£29.99. That’s a seriously aggressive price point for a Corsair mouse and one that puts it in the same league as SteelSeries’ Rival 110, which looks very similar to our review subject. Let’s be realistic though, for that kind of money, you can’t go expect the M55 is going to be a customizable, modular gaming mouse with more buttons than you have blood cells. On the other hand, you shouldn't expect cheap, corner-cutting simplicity either, especially from Corsair.

Corsair claims that the M55 RGB Pro is comfortable to use no matter which hand you use or what kind of grip you favor, be it palm, claw or fingertip. At 4.9 x 2.3 x 1.6 inches (124.4 x 57.3 x 40mm), this is a mid-sized mouse that will fit comfortably in almost anyone’s hand. It certainly felt more than apt for us, and the design and shape of the mouse is instantly familiar to anyone who has picked up an ambidextrous design before.

In fact, it looks a heck of a lot like another budget gaming mouse, the SteelSeries Rival 110 ($23/£25 at the time of writing), except for one key difference. While the Rival 110 only has additional buttons on the left-hand side (a strange choice for an ambidextrous mouse), the M55 RGB Pro has two buttons on each side by the thumb rest. This symmetrical design ensures comfort for both hands, and, of course, it also means you get two extra buttons compared to the Rival 110 –- if you don’t mind reaching for them.

As with pretty much every gaming peripheral released these days, the M55 RGB Pro packs in that cliche RGB lighting, which you can adjust using Corsair's free iCUE software. Only two parts of the mouse light up: the light under the scroll and the Corsair logo. The latter is often covered by your palm when in use, so the RGB lighting feels more like an afterthought, rather than something integral to the mouse’s overall look outside of a photoshoot.

Construction materials are generally very good. Either side of the body has a textured plastic finish (although it feels a bit rubbery), helping to strengthen your grip. South of the scroll wheel is a CPI switch button for letting you change the mouse's responsiveness on the fly. Without iCUE installed, it’ll increase CPI levels in 100 increments. With the software, you get six profiles, where you can configure the CPI manually.

Then there’s the weight. The M55 RGB Pro weighs in at a meager 0.2 pounds (86g). Corsair claims this helps with comfort during long-time use, but we've never had an issue with heavy gaming mice causing strain when playing. Badly positioned buttons and uncomfortable designs are far more of a problem than weight. The M55 RGB Pro is very light, and it certainly won’t be to everyone’s taste. We found that lack of weight actually gave the thing a bit of an insubstantial feel. The build quality is absolutely fine, yet it can be slightly unsettling. It’s just a bit too feathery for our tastes. And unlike some gaming mice, such as the Logitech G502 Lightspeed, there’s no way to adjust the feel of the mouse by adding extra weight internally.

Our weight issues aside, the gaming performance is very good. Switching between CPI levels is easily handled via the button under the scroll wheel, and an LED light above it changes color to indicate the profile you’re using. Each of the standard profiles makes a noticeable change in how the M55 RGB Pro feels.

Low weight combined with a high CPI made it easy to flick the M55 RGB Pro around the desk with ease. Even during  intense firefights and sessions of wrist flicking action, the sensor stayed true. We played some competitive first-person shooter (FPS) games, and this combo of lightweight and high DPI meant we could quickly pivot and fix on targets without too much worry. For fans of twitch shooters, such as Rust and CS:GO, where lightning-fast reflexes are essential, this is a brilliant mouse. However, as we mentioned earlier, the weight does take some getting used to, and at first you may find yourself overshooting where you’re aiming.

As for the ergonomics, the buttons were all within easy reach while playing. When I switched to a different game genre, where slower, more deliberate and accurate controls are needed, dropping the DPI helped provide better control.

Overall, the M55 RGB Pro excels at fast-paced games thanks to its high CPI, which is higher than most at this price point – and its lightweight nature.

You can plug the M55 RGB Pro into your Type-A port right away and get to gaming, but without the software you're limited to controlling the CPI level in 100 CPI increments. For more control, you’ll want to install the free Corsair iCUE software. However, it's a bit confusing at first because its user interface (UI) makes some settings hard to find.

The software has a CPI menu for tweaking the CPI profiles. You get six profiles by default but can turn off all but two of them: the Default setting and Sniper setting, which is set to the lowest CPI, 400, for accuracy. You can tweak the CPI of each level by dragging a bar, or typing in the value in the text box beside it. You can also pick the color of the RGB light above the CPI button based on the CPI level, which is handy for reinforcing muscle memory.

You can also change the Corsair logo's color and lighting effects, like having shifting or pulsing lights. You can also make the logo change color depending on the temperature of your components, such as the CPU, which is a nice touch.

You can link up the lighting settings to other Corsair hardware you have installed with iCUE too. We got the Corsair M55 RGB Pro to sync up with some Corsair memory, headsets and keyboards fairly easily.

For more control over the mouse, you can click Settings and change the polling rate, as well as enable left-handed mode and all side buttons. By default, only the buttons on the left-hand side are enabled.

Finally, you can use the software to assign actions to each mouse button. These actions are in the form of macros, and you need to record each one. There are no pre-made actions available, so you will need to go through each action you want to record by hand, which is overly fiddly and time-consuming.

Overall, you have some good customization options with the M55 RGB Pro, but the software's clunky UI means you might miss them.

The Corsair M55 RGB Pro is a decent gaming mouse for its price, but whether or not it is the right mouse for you depends on your gaming preferences.

The lightweight design won’t be to everyone’s taste. If you want a weightier design, like the 120g Razer Naga Trinity, or a mouse you can tweak the feel of by adding or removing weights, like the Logitech G502 (up to 116g; although, that mouse is wireless), then this isn’t going to be the pointer for you. The mouse is also let down by unintuitive software that makes tweaking certain aspects of the mouse more complex than it should be.

If you want a fast and light mouse for speedy reflexes in hectic games, where a spray-and-pray tactic works best, then you’ll likely appreciate the Corsair M55 RGB Pro’s high DPI and light weight. The fact that it has a truly ambidextrous design means no matter what hand you play with, you’ll be able to use this mouse.