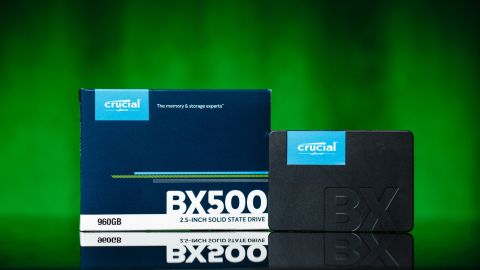 The BX500 has the lowest performance of our comparison pool. As we can see, the DRAMless architecture is a definite weakness in tests that replicate real-world applications that tend to have large datasets.

In this test, most of the top-performing SSDs achieve a total load time of about 22 seconds. The BX500's 28-second load time is better than the HDD, but still much slower than the fastest SSDs.

Crucial’s BX500 is unimpressive during our copy test. Again, it falls into last place against the other SSDs. The BX500's average speed of just 68 MB/s is a slim 21 MB/s faster than the HDD. The BX500 averaged 498 MB/s during the read test, which is slightly faster than the WD Blue 3D SSD and a huge advantage over the HDD.

The 240GB BX500 delivers the typical throughput performance we expect out of a SATA SSD. In this test, it matched its 540/500 MB/s of read/write throughput specification.

Crucial’s 240GB BX500 achieved a low result during the read test, but it beat the M8V and WD Blue 3D during the write test. The mismatched read and write performance leads to a total score that ranks second to last.

The BX500 reached 560/494 MB/s of peak sequential read/write throughput at QD (queue depth) 32. At a QD of 1, it achieves the second-fastest result during the read test, but again, the lowest result during the write test. The drives' 4K random performance, which is a key measure of snappiness in real-world applications, again proves to be lower than the norm.

Official write specifications are only part of the performance picture. Most SSD makers implement an SLC cache buffer, which is a fast area of flash that absorbs incoming data. Sustained write speeds can suffer tremendously once the workload spills outside of the SLC cache and into the "native" TLC or QLC flash. We hammer the SSDs with sequential writes for 15 minutes to measure both the size of the SLC buffer and performance after the buffer is saturated.

Just like many other SSDs, the BX500 utilizes an SLC cache to absorb small bursts of write traffic. After about 13GB of continuous writes, performance degrades from an average of 500 MB/s to 100 MB/s.

We use the Quarch HD Programmable Power Module to gain a deeper understanding of power characteristics. Idle power consumption is a very important aspect to consider, especially if you're looking for a new drive for your laptop. Some SSDs can consume watts of power at idle while better-suited one's sip just milliwatts. Average workload power consumption and max consumption are two other aspects of power consumption, but performance-per-watt is more important. A drive might consume more power during any given workload, but accomplishing a task faster allows the drive to drop into an idle state faster, which ultimately saves power.

The 240GB BX500 manages its power consumption rather well. It consumes just 27mW with LPM enabled, and 0.4W with the feature disabled. Both results land in third place.

The 240GB BX500 continues to sip power during the file copy test. It averages 1.55W, which is the second lowest result. Crucial’s BX500 may sip power at idle and under load, but that doesn’t mean it is efficient. The BX500's average of 44 MB/s-per-watt lands in last place, which is surprising given the DRAMless architecture.