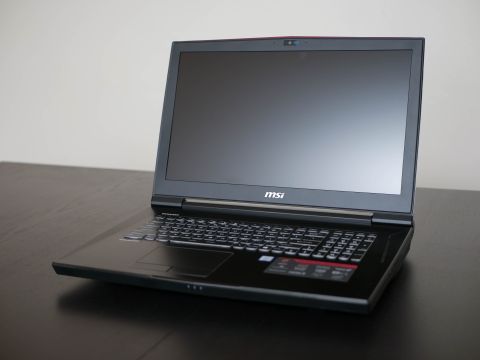 If you value performance over all else, then for the titanic price of $3,600, you can buy MSI’s GT73VR Titan Pro-201. This gaming powerhouse is outfitted with an Intel Core i7-6820HK, 64GB of memory, a 120Hz display, and a GeForce GTX 1080. With the most powerful GPU on the mobile market, the MSI Titan Pro took the top spot in all of our gaming benchmarks.

Nvidia's GTX 1080 is one of the most powerful graphics cards on the market, and if you're lucky enough to have one in your PC you can breeze through modern games at the highest settings with relative ease. But what happens when you put that GPU in a gaming laptop? Today, we're going to find out. We're testing a behemoth of a machine: the MSI GT73VR Titan Pro.

What stereotypes come to mind when you picture a gaming laptop? Perhaps it’s big and thick and heavy, with a ridiculous cooling system and aggressive aesthetics. The MSI GT73VR Titan Pro-201 is all of that, and proudly so. It’s big, it’s bold, and it’s robust.

The hood of the Titan Pro-201 features a black, brushed metal finish, which feels premium to the touch. The MSI logo is stamped in the center in silver, and the Gaming Series shield logo is directly beneath it. Two metallic red accents are found on the sides, and those red accents and the Gaming Series logo are illuminated when the system is powered. Finally, “Titan” is stamped on the bottom just above the hinges.

The bottom of the Titan Pro-201 is constructed of plastic rather than metal. The laptop’s build is solid overall, with very little flex, but the plastic bottom doesn’t feel as satisfying as the top’s brushed metal. The bottom is populated with numerous, wide intake vents colored in red and black.

The black, brushed metal finish continues on the laptop's workspace, surrounding the keyboard. The oddly shaped power button is on the top right-hand corner of the workspace. There are four buttons beneath it: the first button switches the Titan Pro-201 between discrete and on-die graphics, the second button turns up the fan speed, the third button launches XSplit Gamecast, and the final button cycles SteelSeries Engine profiles.

There are four exhaust vents: two on the back and one on each side. You can see just how thick the thick aluminum heat sinks are if you look behind the red-accented back vents.

The display hinge offers about 130° of movement, which is fairly standard, and it is both smooth and firm.

The Titan Pro-201’s speakers are front-facing, but located on the bottom. The subwoofer is behind the left-hand speaker, and delivers impressive bass at high volumes.

Starting from the right, there are two USB 3.0 ports, an SD card reader, and a Kensington lock. On the left are 3 additional USB 3.0 ports, a line-in jack, a line-out jack, a microphone jack and a headphone jack. On the back, you’ll find the Ethernet port, a mini DisplayPort, a USB Type-C Gen 2 port, and an HDMI port.

The MSI GT73VR Titan Pro-201 features a 17.3" IPS display with a 120Hz refresh rate. You can connect additional displays via the mini DisplayPort and HDMI port on the back.

The Titan Pro-201’s fully-fledged chiclet keyboard is evenly spaced and comfortable to type with. The keyboard’s profiles can be managed within SteelSeries Engine 3, and you can create custom backlighting settings for each profile.

The pointing device is a non-clickable trackpad with separate left and right click buttons beneath it. The trackpad is smooth and responsive, but the left and right buttons have a satisfying click. The trackpad’s bezel also features backlighting, which syncs to whichever keyboard profile is selected.

Accessing the interior is as simple as can be. There are five screws securing the bottom plate to the Titan Pro-201. This gaming laptop has the best internal layout presentation by far (of those we've tested), and this is largely due to its adequate space. The beefy cooling system pulls heat away from the CPU and GPU, which are located to the left and right respectively. The Titan Pro-201’s memory slots are located directly above the CPU heatsink. An aluminum heat fin is covering the M.2 slots, which in turn are covering the 2.5mm HDD slot.

MSI's Dragon Center software comes pre-installed in all of the company's gaming systems. The App Portal lets you launch applications such as Nahimic 2 and SteelSeries Engine 3, or user-defined software. The System Monitor shows a brief summary of system resource metrics. The LED Wizard lets you edit the lighting effects on the Titan Pro's keyboard and trackpad. The System Tuner gives you quick access to power, fan, and sound profiles. Finally, the Tool & Help tab gives you easy access to the manual, MSI Help Desk, the product registration page, and battery calibration.