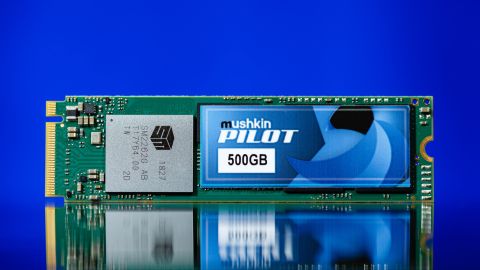 While it doesn't have the newest components or the fastest performance, Mushkin's Pilot NVMe M.2 drive will get you where you're going with reasonable speed at a nice price.

Time for Lift Off

Texas-based Mushkin may have started out making enthusiast-focused memory, but these days the company offers a broad array of SSDs as well. Whether it's in the standard 2.5-inch form factor, or the slimmed-down and often speedy M.2 drives that have become prevalent in the past few years, Mushkin has an SSD at the speed and capacity to fit almost anyone’s storage needs. And if speed is your need, the NVMe Mushkin Pilot is the drive to choose.

Mushkin should soon be pushing out a newer Pilot-E drive. But as of this writing, the Pilot is company's current speed-focused drive. While its design is last-gen, performance is still very competitive, and the drive is all about competitive pricing.

Rated performance is respectable at up to 2,710/1,775 MBps of read/write throughput, but not bleeding edge. SSDs like the Samsung’s 970 EVO Plus and WD’s Black SN750 easily surpass it in raw performance numbers of up to 3.5GBps. But unlike those two companies, Mushkin doesn’t own a NAND fab, nor does it have the ability to bring to market an SSD controller of its own. Instead, the company is bound to other companies such as Micron for NAND and Silicon Motion for controllers.

But, even with this burden, Mushkin’s reputation to deliver low cost and quality products isn’t hampered. The Pilot is actually a good value for those looking to save a few bucks on their storage costs. While Mushkin has to purchase components that are outside of its production capabilities, the Mushin Pilot is still significantly cheaper than those costly previously mentioned drives.

The Pilot features Micron’s 64L TLC NAND flash and Silicon Motion’s SM2262 NVMe SSD controller, the same one found in the Intel 760p. It lacks Intel’s custom firmware, but even with stock firmware from Silicon Motion, the Pilotx is able to do rather well for itself. This is not the latest controller from the company, but it still has enough grunt to keep up with most consumer workload demands.

The Mushkin Pilot has been available for quite a few months and all capacities, ranging from 120GB up to 2TB, are available for purchase at rather competitive prices. The 500GB and 1TB models come in at roughly $0.14 per GB, making them the best value out of the bunch.

Performance figures on our 500GB sample are rated for up to 2,680/1,755MBps read/write; the others vary depending on the specific capacity. Random IOPS performance also varies by capacity. The 500GB model is the highest rated, with figures of up to 335K/277K IOPS read/write.

Unlike most SSDs out these days, the Pilot doesn’t have any official endurance ratings that we could find. So, significant write endurance shouldn't hold back its 3-year warranty coverage.

Mushkin’s Pilot is an M.2 2280 form factor SSD. It connects to the host over a PCIe 3.0 x4 link and communicates via the NVMe protocol. The 500GB sample we're reviewing today features a double-sided PCB design, which means there are components on each side. Overall, the drive isn’t too aesthetically pleasing, with a green PCB and a blue sticker on top. But on the bright side, the components are top quality.

The Silicon Motion SMI SM2262 controller utilizes a DRAM cache for the FTL layer, which is split between two 256MB NANYA DDR3L DRAM packages. Connected to this 8-channel NVMe controller are also four NAND packages, two on each side of the PCB. The full capacity isn’t available for use, rather there is a bit of over-provisioning to help maintain higher performance levels. The total usable space to the end user once formatted is 465GB.

Current page: Time for Lift Off