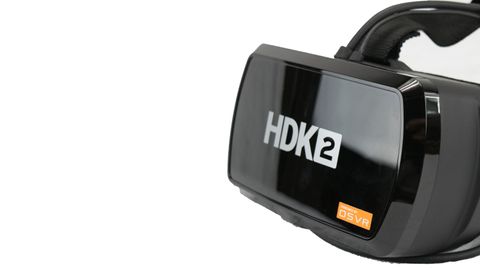 Part of the OSVR HDK 1.4's charm was its mainstream hardware requirement, owning to a single 1080p display refreshing at 60Hz. In comparison, the Rift, Vive, and now HDK 2.0 utilize twin 960x1200 screens at 90Hz. The faster refresh rate and higher cumulative resolution necessitate a much more capable gaming PC. Where the HDK 1.4 demands 124.4 million pixels per second from the GPU, the HDK 2.0 wants 233 million pixels per second.

For the HDK 1.4, you could conceivably get away with a GeForce GTX 660 (note, you had to use an Nvidia GPU; Radeons weren't supported when we evaluated the HMD). The OSVR HDK 2.0 calls for more powerful cards, though it now supports AMD hardware, so that's good news.

Interestingly, there isn't an explicit list of recommendations from the OSVR group. It's tempting to use Oculus' and HTC's original baselines as general guidance. But remember that Oculus lowered its bar when the company announced Asynchronous Spacewarp. The OSVR platform doesn't support ASW or any equivalent. Moreover, the HDK 2.0 doesn't support Asynchronous Timewarp or reprojection, which are needed to make a GeForce GTX 970/Radeon R9 290 viable for smooth VR. You'll want to aim higher as a result.

Vast improvements were made to the setup process since the last time we looked at an OSVR HMD. Back then, the software was very much a work in progress and installation wasn't unified in any way. We had to configure different applications in order to support native OSVR content and SteamVR games.

In the year since we first played with an HDK 1.4, OSVR released a Windows-based installer that includes all of the drivers and utilities needed to use the HMD with native content and SteamVR-based applications.

The software installs an OSVR Server console, which is responsible for the HDK's runtime. It also installs a firmware update utility, some test applications, and a tray icon that facilitates access to these apps, along with configurable settings. You can start, stop, or restart the OSVR Server Console from the tray icon.

When you start the OSVR Server Console, it opens to give you a glimpse of what’s happening in the background. The server console also logs the headset and tracking camera’s operation in real-time.

At which point the tracking camera sees the HMD, it takes a few seconds to calibrate the HMD's location. If the headset isn’t still during this process, you’ll see an error in the log. The console constantly polls the tracker’s camera, though, so as soon as the headset is sitting still, calibration continues.

OSVR's new setup package also makes it so that you don't have to reinstall the software every time you want to switch from native to SteamVR content and vice versa because it includes the drivers for both platforms.

Valve helped out by officially embracing the OSVR platform in November and adding a content category for OSVR-compatible software. To date, over 300 titles are purportedly supported, though we've found multiple examples that we couldn't get running. By getting behind the platform, Valve removed the need to opt into a private beta branch of SteamVR to run an OSVR HMD. Now SteamVR detects the headset, so long as you have OSVR Server running.