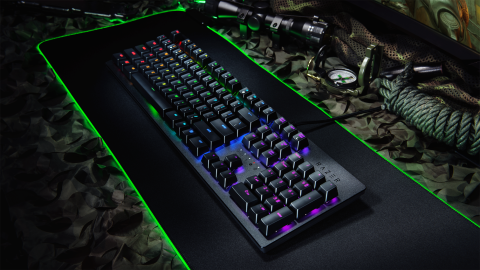 The Huntsman packs possibly the finest mass-market key switch available today, in a package which oozes class. Rarely has a keyboard this basic, at this price, earned its asking price so handily.

The arrival of the Razer Huntsman -- the sleek, cut-down sibling of the larger and more full-featured Huntsman Elite -- means it's time to continue our dive into the world of opto-mechanical keyboards, veering left from the analog domain of the Cooler Master MK850 or the Wooting One to check out a keyboard which employs entirely digital optics. But light wasn't the first thing that crossed our minds when it hit the desk.

Let's be entirely honest: We got excited when Razer's green box arrived, didn't even read the product name, and went in blind. Before we realized that this Huntsman was made of special stuff, we were impressed by its feel, its construction, and the sound. These are incredible switches, optical or not, and they're brilliantly presented.

Although the full-fat Huntsman Elite is a bank-breaker, coming in at £200/$200, this less-complex non-Elite model slices off a bunch of arguably extraneous features (there's no underglow, no frivolous RGB wrist rest, no fancy media control cluster in the top right) in order to chop a 25% off that price. At £150/$150, the base-level Huntsman is still expensive, and it's not hard to find highly credible bells-and-whistles keyboards for less than that price. But in keeping the core features present and correct without the fuss, Razer may have made an even better keyboard.

Dialing the Huntsman back from its big brother sees Razer about as visually subdued as it ever gets, with little of the company's usual over-exuberant lighting or over-angular design present. This is -- dare we say it -- almost classy. The Huntsman is a black rectangle, and only the Chroma lighting really does anything to go against that, as even Razer's own logo is cast almost imperceptibly in gloss black on the matte black top right corner of the aluminum base. A neat row of function indicators, which lights up to signify both the usual PC locks as well as the Huntsman's built-in macro and game modes, sits quietly above the arrow keys. The key font, in keeping with the company norm, is a thin, handsome typeface, and one that's far more appealing (at least to these eyes) than some of the more chunky lettering preferred by other manufacturers.

As with the Elite, the Huntsman's braided cable is hard wired with what looks to be a decently tough connection, and there's a pair of two-stage feet which offer up angle options. Unlike the Elite, there's no wrist rest included here. This is as basic a package as you're going to find for the money.

The keys follow Razer's usual slightly compressed horizontal layout, which can (at least temporarily) upset dedicated touch-typists, but we found ourselves taking to them in very short order. We also found ourselves taken to the sound of these keys, and this seems like an opportune moment to talk about that: This is one crispy key switch. Ever so slightly lighter to actuate than Razer's green switches, and very slightly higher in pitch, the company's Purple optical switches feel brilliant, with just the right amount of resistance, a pleasing click, and a satisfying "thwock" upon bottoming out. They may not endear to those around you (we had noise complaints from a floor above while writing this review), but if you like a keyboard with definite feedback, these switches tick the box.

Razer calls the switches opto-mechanical, although the actuation bit is entirely optical. As you depress the key, the base of the switch stalk breaks a beam of infrared light, which sends the signal through to the hardware. The actuation and reset points of the switch are basically at precisely the same point, and the optical mechanism means there's little to none of the debounce delay you'd usually find in a mechanical switch. Actuating at just 1.5mm of their 3.5mm travel, they're also higher clicking than virtually every other switch out there.

The mechanical part is almost entirely superfluous--at least from a functionality perspective. They're there to give these keys a "clicky" bump and that crunchy sound. That said, the two parts are perfectly balanced together; try as we might, we were unable to actuate any key without an initial click. It is possible to hold a key beneath the bump and actuate it multiple times, though the switches are springy, so this isn't something that'll happen unless you really try.

The only real nitpick is their stability, which is entirely a byproduct of the switch mechanism. Each switch is braced with a space bar-like bracket, which the company states is both there to reduce the number of moving parts required and to ensure a smooth downward motion of the switch. If only the bracket did a little more stabilizing: While they no doubt go down straight enough, there's a noticeable amount more lateral wobble to the keycaps here than on a traditional mechanical switch.

Back to the point: In terms of straight typing, this is among the fastest and most pleasant keyboards we've ever used. We didn't notice any significant increase in typo numbers in our tests, perhaps because the narrow-topped keycaps work so well with the audible feedback of the keys, and the speed of the switches bumped us up 10wpm on our usual average. We would be happy (even if our ear-bashed colleagues wouldn't) to take this on as a daily driver.

Social gamers may wish to heed our warnings about noise, because the Huntsman is just as polarizing on mic as it is in person. Great for you, not so much for your friends, it's almost the equivalent of blaring loud music during a game. Clatter away too hard, and you're likely to get muted. That doesn't mean we didn't absolutely love it for gaming, because it's as awesome for controlling as it is for typing. These are quick and resistant switches, but they're not stiff enough to tire the fingers. The audible feedback is a definite benefit in twitchier, more fast paced games like Quake Champions, although it's debatable whether it's required in more considered, generally slower titles like Assassin's Creed Origins.

The lack of a detachable cable means this isn't perfect for portable gaming, though its cool and calm design makes a statement when you whip it out of a bag. It does lack the extras of the Elite version, as we've said. And we did miss, for example, the presence of dedicated media keys, so the Huntsman won't suit every gaming environment. But every single one of its core functions is perfectly pulled off. Without doubt, this is an excellent keyboard for gaming.

The Huntsman's lighting is the one thing which drags it away from the black rectangle dimension, but even then it's on the more subtle end. The black base reflects very little glow back, and that which does reflect is quite direct, giving the key bases a square edge rather than some diffuse rainbow effect. The large top edge of the key switches means there's little room for LEDs, but Razer has been reasonably generous with the photons, including a bright rectangular spot at the top of each key. Knowing that upper illumination usually ends up making the lower function of keycaps look dull and washed out, Razer has silkscreened these instead, which looks plenty pretty, at least until you need to work out which F-keys hold the volume controls when playing in the dark. Thankfully there's a small concession to this in that hitting Fn drops the lights on all but the secondary functions.

Razer's Synapse software is pretty brilliant both for lighting customization and macro creation. We're not over-keen on its layout, and the company seems relatively eager to do its own thing when it comes to custom profiles for individual games, but it's workable. The fact that you can store and switch between five profiles simultaneously on the keyboard and in the cloud means you won't always have to have it running. The Huntsman is, as you might expect, part of Razer's Chroma ecosystem, and Synapse lets you go crazy and sync up the coloring of all your compatible Razer and non-Razer gear, not just with each other but with specific games and apps too.

There's very little to dislike about the Razer Huntsman. It's an unfussy, ultra-responsive keyboard with a great feel and sound. Some might mourn the lack of dedicated media controls. Some might be a little irritated by the software or the sound of the switches. Some might (rightly) balk at the price. But we can't help but look over those things. Razer's Purple opto-mechanical switches are -- and we say this with no amount of undue hyperbole --absolutely superb. While they're no doubt primarily intended for gaming, reviewing this has ruined us to the point where we now don't want to type on anything else.