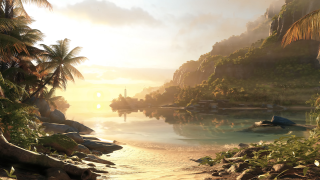 The Twitter channel @Crysis has been dormant since 2016, but that just changed when Crytek's employees outed the first tweet in 4 years, as spotted by TweakTown.

Of course, that tweet doesn't tell us anything concrete, but it does bear further weight to our previous suspicions that Crytek is working on a remastered Crysis game or a new Crysis title of some sort. The company has been teasing us for some time now, as evident from the following two videos.

This first video details breathtaking features of the upcoming CryEngine 5.6. Keep your eyes peeled at the 2:17 mark. Does anything about that scene feel familiar?

In another video, Crytek also dropped what appeared to be a small tease of a new Crysis game. Crytek uploaded this video last month, showing a chronological list of games built with the CryEngine, only to conclude with a fragment from the original game.

Given that the video showcases games of the decade, it seems unusual to include a fragment of the original Crysis game at the end, considering Crysis came out in 2007.  That is unless Crytek is trying to tell us that Crysis will be coming out in 2020.

On top of all this, EA,which owns the rights to the Crysis games, hinted in October 2019 that it would be making "some exciting remasters of fan favorites."

We'll have to take these rumors with a pinch of salt, but all these events don't seem like a mere coincidence. Crytek has also been working hard on ray tracing technology that runs on all graphics cards (not only RTX GPUs), for which it outed a public demo in November last year.

As far as the tweet goes, we're hoping that this will be the first of many. If the channel is "receiving data," then chances are it will soon be telling us more.