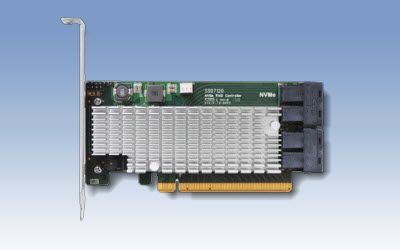 Most prosumer products have enterprise DNA. For instance, the Optane 900P is a reconfigured enterprise DC P4800X and the Core i9 7900X is a cut-down Xeon. For decades, RAID has been a beneficiary of intense development in enterprise storage, but those days are over. The widespread adoption of flash-based cache, larger arrays that consolidate shared storage in dedicated boxes, and improved storage management software has nearly halted hardware RAID development.

NVMe SSDs have begun to displace high-performance RAID arrays because they are obviously superior to the clunky arrays that took up most of the space inside our computer. The SSDs use the PCIe 3.0 x4 interface and deliver plenty of performance. But at the same time, CPU count counts have doubled, so workstations need faster access to more data.

The workstation market is a niche, but it is not small. Companies like Dell and HP have successful product lines in this segment, but system integrators that specialize in workstations, like Boxx Technologies, also thrive. The companies all follow the same schematic to deliver high-performance machines capable of processing massive data sets in the least amount of time. Intel produces purpose-built Xeon W processors for workstations, and you need a powerful storage array to feed them with massive data sets.

We think that 3D XPoint technology will take over the workstation and high-performance market until a capable competitor emerges, like Samsung's upcoming Z-NAND SSDs. The $6,000 1.5TB P4800X is the largest 3D XPoint product available. That's a big price to pay for high-performance capacity.

The HighPoint SSD7101 with Samsung's 1TB 960 Pro SSDs works best for sequential workloads. The adapter does add some latency that can degrade random performance to less than a single drive, but the 900P has so much random performance that you still come away with an array that is superior to every flash-based SSD on the market.

Using the available performance is another story. Casual computer users can't even take full advantage of low-cost consumer SSDs. NVMe SSDs deliver even more performance, but you need a heavy workload. 3D XPoint is the first new memory in decades that addresses that issue. It scales wonderfully at low queue depths and delivers low latency across the board. The consistent performance and near-linear scaling is a natural fit for RAID arrays.

The Optane 900P SSDs allowed us to push the HighPoint SSD7120 to the limits. The SSD7120 is not a perfect product, but it is versatile enough to fill gaps for uncommon use-cases.