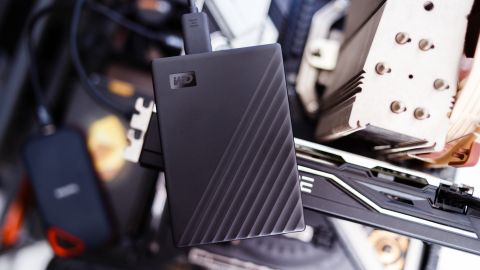 Today, we compare WD’s My Passport to a 2TB LaCie Mobile Drive based on Conventional Magnetic Recording (CMR) technology, as well as a bunch of speedy external SSDs we have tested. As the fastest of the bunch, Samsung’s X5 boasts Thunderbolt 3 performance but is closely followed by SanDisk’s Extreme Pro and LaCie’s Rugged SSD, both high-end 10Gbps devices. Following them, we threw in the low-cost (for an SSD), QLC NAND-based Crucial X8 and the DRAMless Samsung T7 Touch. We also added in an older SanDisk Extreme for good measure.

When it came to writing our test folders, the My Passport held up well to LaCie’s Mobile Drive, only lagging it a few MBps here or there. WD’s My Passport even surpassed it during the photo transfer. In reading back our large .zip and movie files, again, the LaCie lead the WD drive by a bit. Compared to flash, as we would expect, these HDDs are much slower. So if you prioritize speed at all, you should probably opt for an SSD.

PCMark 10 is a trace-based benchmark that uses a wide-ranging set of real-world traces from popular applications and common tasks to measure the performance of a storage device. To test drives that store files rather than applications, we utilize the Data Drive Benchmark.

Averaging 64 MBps in bandwidth and scoring similarly to LaCie’s Mobile Drive in this test, WD’s My Passport provides enough performance to compete with CMR drives. It of course lags the flash competitors significantly with significantly higher latency.

Sequential performance comes in a little higher in our iometer testing, bursting up to 127/128 MBps read/write, and random performance is about what one should expect from an HDD. WD tweaked to the My Passport to perform pretty responsively under random writes, too.

As one would expect with a hard drive, WD’s My Passport doesn’t feature a write cache. But, unlike the inconsistent write performance we’ve seen with other SMR HDDs, WD’s My Passport writes extremely consistently. It even surpasses the LaCie Mobile Drive in total writes by the time the 15 minutes is up, writing nearly 30GB more. This pales in comparison to what a good SSD can do, but is impressive for a mobile hard drive nonetheless. And, temps were never an issue when testing.