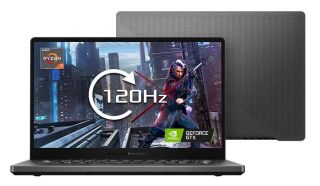 Update 3/10/2020: Since we've published this article we've spotted AMD Ryzen 4000 laptops from Asus on Newegg Canada as well. They're listed with a release date of March 16.

AMD announced its new Ryzen 4000 H-Series high-performance laptop CPUs in January, and ever since it's been a waiting game for devices sporting them. But the wait is over -- at least in China. Spotted by hardware leaker @Momomo_US, Amazon China has now listed three Asus gaming laptops with the new chips.

The specifications for the AMD Ryzen 7 4800H are freely available. The APU packs eight cores and 16 threads, has a base clock of 2.9 GHz and a max boost clock of up to 4.2 GHz on its best cores. It comes with a default TDP of 45W and seven GPU cores to save power during times when a system's dedicated graphics card isn't needed.

Contrastingly, AMD has not officially announced the Ryzen 7 4800HS chip yet, so there is no product page for it on AMD's website yet nor did the Amazon pages reveal any details.

We have previously suspected that the Ryzen 7 4800HS is a more power-efficient chip than the 4800H, and others too expect it to be a more efficient chip with a 35W TDP. This wouldn't come as a surprise, given the slimmer form factor of the Zephyrus notebooks over the TUF laptop.

Either way, it's exciting to see the new Ryzen 4000 series mobile chips landing, and we're curious to see how they'll perform compared to the blue team's competition.