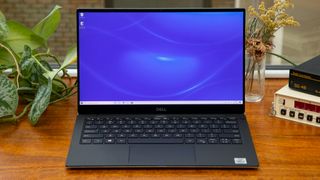 The Dell XPS 13 is the company's flagship laptop, and on Black Friday it's on a sale for the lowest price we've seen it yet. The latest model, with Intel's 10th Gen "Comet Lake" processors, is 12% off with the coupon code SAVE12.

Use the coupon SAVE12 to get the Dell XPS 13 with an Intel Core i3 CPU, 4GB of RAM and 128GB of SSD storage.View Deal

With the coupon SAVE12, you can get the Dell XPS 13, with an Intel Core i5 CPU, 8GB of RAM and a 256GB SSD, which is the lowest configuration we would recommend for most people.View Deal

We reviewed the Dell XPS 13 with higher end specs (that's on sale, too!), including an Intel Core i7 and 16GB of RAM. We found the 13-inch display to be bright and colorful, and we're thankful that Dell has put the webcam above the display.

The design is tried and true, and most importantly, we got strong battery life from this laptop in our testing.