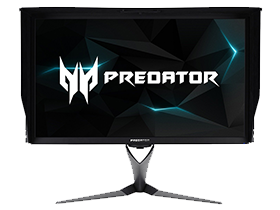 The Acer Predator X27 presents a stunning image in both SDR and HDR modes and brings high speed and smoothness to gaming. With Ultra HD resolution, a 144Hz refresh rate, G-Sync and reference-level performance, it represents a standard for others to shoot for.

No matter how many technologies a company stuffs into a gaming monitor, there are users who want more. Resolution is probably the most sought-after feature, followed by refresh rate. But what if you could have it all? We’re talking about a true reference-level, state-of-the-art display with everything a gamer could want, squeezed into a single chassis. If you’re thinking, “You must be talking about the Asus ROG Swift PG27UQ,” you’re wrong.

While $2,000 is more than you’ll pay for many 65-inch televisions, one must appreciate the amount of technology that goes into a monitor like this. For starters, you won’t find a 384-zone backlight in anything but a premium reference display. We first saw one in Dell’s UP2718Q and didn’t see another until Asus’ PG27UQ, which we reviewed a few weeks ago. Why does this matter? Because it’s the only way to see HDR’s full potential.

A full-array backlight means that power can be allocated to just part of the screen, making it feasible to hit 1,000 nits peak. To achieve the contrast promised by HDR, 1,000 nits should be considered a minimum brightness. Since it'll never achieve the deep blacks of an OLED or plasma panel, the only way an LCD screen can boast a truly wide dynamic range is to up the brightness level. The X27 is only the third monitor we’ve reviewed that can manage this feat.

No assembly is required; the X27 lifts out of the box, ready for action. One thing that surprised us was the inclusion of a light hood, as this is something normally seen only in high-end professional monitors.

Cables include USB 3.0, HDMI and DisplayPort. The external power supply comes in brick form. A cover tidies up the input panel along with a cable clip for the upright. There’s also a factory calibration data sheet for the sRGB mode, but no such information is included for the Adobe RGB or HDR modes.

The X27’s hood is quite substantial, made from thick, rigid plastic lined with light-absorbing fabric. The sides bolt onto the panel (you’ll need a Phillips-head screwdriver), and the top snaps in place. Once installed, it really helps improve image quality in all but the darkest rooms. Honestly, this is something users should consider adding to any monitor. It makes a significant improvement to perceived contrast.

The bezel sits higher than the anti-glare layer and is 11 mm wide at the top and sides and 21 mm wide at the bottom. We’ve seen photos of the X27 with a Tobii Eye Tracking device installed on the lower edge, but our sample did not include one. On-screen display (OSD) controls are around the back of the lower-right corner and consist of three buttons and a well-designed joystick. You can program two of the buttons for different functions, like brightness or input selection. The stick brings up a comprehensive OSD, loaded with features for both HDR and SDR gaming.

The stand is an elegantly thin piece of cast aluminum, finished in medium gray. The swivel point is a large stack of discs that add a nice heft to the package, which weighs just over 20 pounds. Adjustments include five inches of height, 20-degree swivel in each direction and 25-degree forward and five-degree backwards tilts. There is no portrait mode. Movements are firm and solid, as one would expect at this price. The stand includes a stout handle, making it easy to move the heavy display around.

The X27 is a bit thicker than many LCD monitors at nearly 3.5 inches. Two USB 3.0 ports adorn the left side, while the upstream and two more downstream connectors are found in back. Video inputs include one each of HDMI 2.0 and DisplayPort 1.4. For G-Sync, you’ll need to use the latter. Audio is supported by a 3.5mm headphone output and two 7-watt internal speakers. The speakers play quite loudly without significant distortion and feature a nice mid-range without too much high-end harshness. They sound better than most of the built-in monitor speakers we’ve heard.

Two clicks of the handy joystick summon the OSD. There are eight picture presets, including a fully configurable User mode. There is no HDR emulation available for SDR material. To see HDR, you’ll need HDR content.

The X27 advertises an Adobe RGB color gamut, which is accessed by turning off an option called SDR sRGB Color. With more red than the Adobe spec calls for, you’ll see later in our tests that it measures closer to DCI-P3, which is a good thing. For standard content, it’s best to leave sRGB on because you’ll find there is no need for calibration. If you do wish to tweak in this mode, there are RGB sliders and a gamma offset feature. You can also toggle the variable backlight feature, which really helps with contrast in SDR mode.

Gaming features include an overclock, which takes the X27 from its 120Hz native refresh rate to 144Hz after a reboot. Our sample had no problems running at 144Hz, though the extra heat activated an internal fan that was a bit loud. The Asus PG27U has a similar fan, but it runs more quietly. You can also set the variable backlight feature to different modes, like Gaming or Desktop, which alters the level of dynamic contrast depending on content. We found Gaming to provide the best performance. Also included are aiming reticles, an fps (frames per second) counter and a three-level overdrive control. Normal is the middle setting and offers good blur reduction without much ghosting. Speaking of blur-reduction, ULMB is not included.

Fans of LED lighting will enjoy the effects that appear on the panel’s bottom edge and backside. You can turn one or both on, or leave them off if you wish. There are multiple settings, like breathe and flash, and you can vary the color. Hundreds of combinations are possible, and we had a ball experimenting with them.

The X27 also features auto brightness and auto black level, courtesy of a tiny sensor mounted at the top of the panel. When turned on, it measures room light and adjusts the picture accordingly. In our lab, we never found a need for this feature. It pumped out some brightness if conditions changed during gameplay. Ultimately, it created too much distraction.

When you’re done setting the X27 to your liking, all options can be saved to one of three memories, a feature we’d love to see on more monitors.

The X27 doesn’t require calibration for SDR content. If you want to access extra color in SDR mode, turn SDR sRGB Color Off. This will give you an Adobe RGB gamut that measures closer to DCI-P3 in actuality.with a good deal of additional red.

To wring out every possible drop of performance, we calibrated the User mode using the RGB sliders. The gamma is a tad light, but the other presets are too far off the mark to make an improvement. We liked how the brightness control is measured in nits and found it measured quite close to correc. If you set 200 nits, you get around 208 nits; pretty cool.

Here are the settings we used for SDR content.

HDR mode is as accurate as SDR mode, which is a good thing since most image settings are grayed out here. In HDR mode, there are no picture controls available except for color temperature. We found good results from the RGB values used in SDR mode. There is no way to adjust peak brightness for HDR content, but Windows and most games allow you to tailor brightness output to your preference.

Next Page Brightness and Contrast
14 Comments Comment from the forums