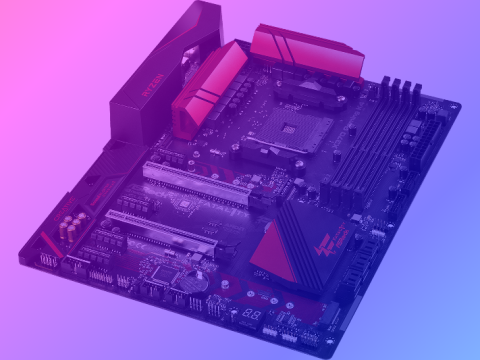 If gaming is your thing, the ASRock X370 Gaming K4 rises to the reputation of the Fatal1ty brand. It performs well, and does so at a competitive price.

With Ryzen forging its path, we're starting to get a few more AM4 motherboards, which means that we can evolve from AMD 970 chipset comparisons to a more level competition. We caught some flak from readers regarding reference data, choice of GPU, and limited depth in our review of the ASRock X370 Taichi.

Next up: the ASRock X370 Gaming K4. It's back to the Fatal1ty series and placing the focus back onto gaming.

ASRock's Fatal1ty series has refined the standard for using red and black in its motherboard schemes and marketing. The early executions were quite sloppy, and aesthetically this X370 Gaming K4 is a step in the right direction. The large box shares the same footprint as the X370 Taichi, and the graphic arrangement seems much more balanced with the extra real estate.

The X370 Gaming K4 backplate is slightly different than that of the Taichi, providing two PS/2 ports, six USB 3.0, one USB 3.1 Type-A, one USB 3.1 Type-C, five analog audio jacks, SPDIF, gigabit Ethernet, and HDMI 1.4. Of course, that HDMI port won’t work until AM4 APUs hit the market later this year. There is also space for two WiFi antennae to be routed and mounted to the backplate, although this product does not provide any of that hardware. The X370 Gaming K4 serves Creative's Sound Blaster Cinema 3, which is only a slight deviation from the Taichi audio solution. The bottom edge of the board hosts the TPM, two 4-pin fan headers, two for RGB, the standard USB 2.0 header, and front panel headers.

As for storage options, two type M key M.2 ports deploy Gen2 x2 PCIe and Gen3 x4 PCIe through the M2_2 and M2_1 sockets, respectively. Six right-angle SATA 6 Gb/s ports sit on the right edge of the board next to the RGB'd Promontory heat spreader. This should be plenty of fast disk I/O for gaming applications, but could be a limiting factor for workstations. We would have preferred an x4 connection for the M2_2 slot at the cost of losing some USB ports or some of the x1 slots.

The remainder of the board layout is straightforward, giving immediate and easy access to the USB 3.1 headers, 24-pin ATX, and single-ended memory DIMM slots towards the front of the chassis. Two 4-pin fan headers next to the voltage regulator heat spreaders give access to optional CPU fans and water pumps, however water pumps are limited to a maximum of 1.5A. Speaking of voltage regulator heat sinks, these appear to be similar in size of those of the ASRock X370 Taichi, but lack the angles and style in favor of simplicity.

With the extra storage, M.2, and WiFi M.2, there are only two PCIe x16 and four PCIe x1 slots available. The lack of additional x16 or x8 slots limits the higher end card options. But then again if you need more I/O, you wouldn't be considering a board with features aimed at gaming enthusiasts.