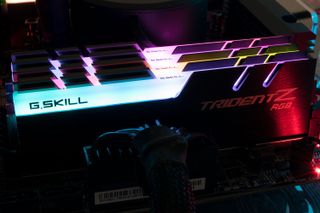 A fine line has always separated the HEDT (high-end desktop) platforms from the mainstream platforms. You commonly find hardcore enthusiasts, content creators, and workstation users opting for the first, while the average computer user or gamer often settle for the latter. Since the HEDT platform targets more demanding users, it naturally comes with a bigger feature set, such as support for core-heavy processors or a more generous amount of memory slots, storage options, and PCI Express slots.

Sadly, you don't get the extra features for free, though. Building a PC around a HEDT platform typically requires a bigger investment because HEDT parts are considerably more expensive. You probably would want to spend your hard-earned money where it matters most. This article will evaluate the impact that memory speeds have on the X399 platform. Our testing includes multiple memory speeds that span from DDR4-2133 up to DDR4-3333 in different scenarios to determine whether the benefits of investing in the faster memory kits outweigh the cost.

The AMD X399 chipset, which is a little over two years old now, continues to be the Red Team’s flagship enthusiast platform. Since its inception, the X399 chipset has seen and housed up to two generations of AMD Ryzen Threadripper desktop processors. As one would expect, memory support has gone through its own gradual evolution.

One of the selling points for the Ryzen Threadripper processors is the native support for quad-channel memory. As a result, AMD X399-based motherboards that adhere to the ATX form factor frequently come equipped with eight DDR4 memory slots. This has opened the door for consumers to stuff up to 128GB of memory inside a single system when all the memory slots are populated with 16GB DDR4 modules. Although quad-channel memory is the norm on the X399 platform, you can still conceivably use memory modules in a dual-channel or even single-channel configuration. However, that would defeat the purpose of acquiring a HEDT platform in the first place.

The memory kit that we're using hails from G.Skill's Trident Z RGB product line. It is made up of eight memory modules that are produced on a ten-layer PCB (printed circuit board) with Samsung b-die chips. Each memory module is 8GB and ticks at 4,000 MHz. The timings are configured at CL18-19-19-39 with an operating voltage of 1.35V.

G.Skill's Trident Z RGB memory respects the JEDEC standard and runs at 2,133 MHz with CL15-15-15-36 timings and 1.20V operating voltage. Nevertheless, the memory modules come with two XMP 2.0 profiles. The first makes them operate at 3,733 MHz, and the second at 4,000 MHz with the advertised timings.

The MSI X399 Gaming Pro Carbon AC is the motherboard of choice for our X399 test system. The motherboard has a robust phase power delivery with a 10+3 phase design. Ten phases tend to the needs of the processor while the other three phases take care of the SoC (system-on-chip). MSI endowed the X399 Gaming Pro Carbon AC with eight DDR4 memory slots and support for memory speeds up to 3,600 MHz, and beyond. The motherboard also supports ECC (error-correcting code) memory modules.

MSI's DDR4 Boost technology has pretty much become a standard on the brand's motherboards. It's basically an optimized memory circuit design where memory slots are wired straight to the processor with no impeding components in between that can interfere or degrade the signal. As an added measure, MSI also isolates the memory circuit from the rest of the motherboard, which further helps reduce interference. Visually, it's like having a PCB within a PCB with a fence between the two.

Motherboard PCBs are produced with a combination of resin and fiberglass. In an ideal world, memory traces should be placed over the fiberglass to maintain the integrity of the memory signals. However, they are sometimes hampered by resin holes that can interfere with the signals. MSI's solution to the fiber weave problem is to distribute the memory traces in a zig-zag pattern to circumvent the resin holes.