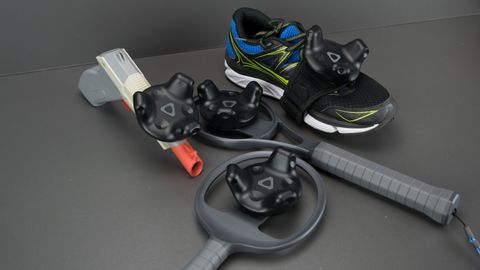 How We Tested The Vive Trackers

Nearly two years into the advent of consumer VR, our testing options continue to evolve. Nvidia’s FCAT VR remains the best tool at our disposal for performance analysis. However, Nvidia hasn’t updated the software since its initial release in July, and we noticed that newer games don’t always play nice. When we received our first two Trackers, we tried benchmarking VR Monsters Awoken with the full-body tracking system enabled, but the game crashed every time we tried to launch it while FCAT VR was running. We had no choice but to wait for more compatible software.

In early December, when Cloudgate Studio released the Virtual Self update for Island 359, we discovered that it worked properly with FCAT VR. Island 359 supports up to three Trackers, and it also gives you a virtual avatar when you don’t have any Trackers. We took four performance samples, one for each configuration, to determine whether more tracking points increase CPU load.

We guessed in advance that the Trackers would have little impact on performance. We even posited that receiving data from additional tracking points would lighten the load from Cloudgate’s inverse kinetics (IK) system. Our results prove those theories wrong.

The focus of this particular testing is to determine if the Vive Trackers complicate the processing workload, not to identify the best hardware to use with Vive Trackers or Island 359. As such, we didn’t swap out any of the parts in our VR platform. It boasts an Intel Core i7-5930K @ 3.5 GHz, 16GB of Crucial Ballistix DDR4-3200, and a GeForce GTX 980 Ti graphics card.

Island 359 features a large, jungle map with random dinosaur spawn points. It’s nearly impossible to repeat the same process and encounter the same dangers over multiple runs. To avoid inconsistencies and limit the variables, we chose to run our tests from the home camp where you start before setting out on a mission.

For each test, we loaded the game, created an avatar profile to match our hardware configuration, and entered the main camp. From there, we launched FCAT VR and danced around our room-scale space for 60 seconds. We figured that dancing around would be a great test for the IK system, and it would put the most stress possible on the SteamVR Tracking system. We did our best to repeat the same moves for each test.

While we ran our benchmarks, we didn’t notice any issues in the headset. For the most part, performance was consistent for all four configurations. However, FCAT VR observed some anomalies (dropped frames) when more than one Tracker was enabled. We ran the tests again to rule out isolated hiccups, and the second round confirmed that our test system did encounter some trouble keeping up with five or more tracked objects (HMD, two controllers, two or more trackers).

We suspect that the issue is CPU-related, but we’ll test this more thoroughly in the coming weeks with an eye toward recommending minimum system specifications for adding more Trackers. This will include evaluating performance across a wider range of games. As of early December, Nvidia claims to be working on an FCAT VR update. We hope this irons out compatibility.

When HTC first announced the Vive Tracker and revealed its potential for interchangeable tracked VR accessories, we imagined that we would see a robust array of low-cost accessories to pair with them. With the tracking sensors, battery, and logic circuitry embedded in the Tracker, accessories could be cheap and easy to manufacture.

To some extent, HTC delivered on our expectations. The Vive Racket Sports Set and the Hyperkin Hyper Blaster are both available in bundles that include Vive Trackers and pack-in game codes for $150. A single Vive Tracker costs $100, so a bundle package puts the actual accessories at around $50. We would like to see the Racket Sports Set sell for slightly less—perhaps $140—since it lacks any electronic components. The Hyper Blaster, with its fully mapped button configuration, commands a fairer premium.

But it’s the price of the Vive Trackers that makes us pause. At $100 each, HTC expects you to dole out another $300+ to experience full-body tracking. When you consider that there isn’t much you can do with a single Tracker (without a peripheral), the $150 accessory bundles start to look like decent deals.

With the addition of the Trackers to its Vive platform, HTC's pricing starts spiraling out of control. The Vive costs $600, which is already $200 more than an Oculus Rift. If you want the mechanical head strap with the integrated headphones, that sets you back another $100. And now, if you want full-body tracking, you need another $300 for three Trackers and $24 for TrackStraps. Add another $100 for the Hyper Blaster and Racket Sports accessories.

That's $1300 for everything. You get a lot more functionality than a Rift would give you, but as much as we love stomping dinosaurs (at least the mean ones) and holding a pistol in shooter games, we’re not convinced that the masses will splurge for the few experiences currently available. HTC is doing a great job differentiating its Vive platform, but the company’s à la carte approach is sure to scare off many potential customers.