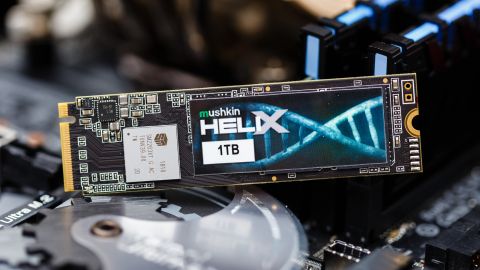 Mushkin’s Helix-L is an entry-level NVMe drive that offers high-speed performance at a low price. While it doesn’t excel in prosumer workloads , it's a great bang-for-the-buck buy for budget gamers.

Mushkin’s Helix-L is an entry-level SSD through and through. It’s pretty cheap, comes with a 3-year warranty, and it features a DRAMless controller architecture. Even so, it can still deliver a more-than-acceptable level of performance for gamers and mainstream users alike.

Mushkin’s Helix-L is marketed toward budget-conscious gamers with its DNA theme and pricing -- the 1TB model sells for just $107.  It's powered by Silicon Motion’s SM2263XT PCIe 3.0 x4 NVMe SSD controller, and our sample features Micron’s 64L TLC NAND flash. This combo lacks DRAM, but resourcefully utilizes Host Memory Buffer, a feature of the NVMe protocol to aid performance instead.

This feature uses a tiny 64MB portion of the host’s DRAM to cache the SSD’s FTL mapping table for better performance than without it. It’s a big improvement over non-HMB designs and can help deliver surprisingly good performance in various tasks.

The warranty length is a rather standard at just 3-years, but the drive has endurance figures that match both the Samsung 970 EVO and WD Black SN750. As well, it comes with the standard support for TRIM (via NVM Deallocate), S.M.A.R.T. data reporting, secure erase via the Format NVM command.

Mushkin doesn’t provide the end-user an SSD Toolbox for support. But as nice as that feature is to have, it's not really a necessity. There is plenty of freeware that can cover mainstream cloning and monitoring needs. You do get a Mushkin Enhanced case sticker in the box, however.

The Mushkin Helix-L is an M.2 2280 form factor SSD that comes either a single- or double-sided, depending on your luck of the draw. Our sample was single-sided and utilizes Micron’s 64L TLC to deliver responsive performance.

Aesthetically, the Helix-L features a black PCB. The DNA sticker on top of the drive is more attractive than most we've seen on M.2 SSDs, but drives with heatsinks usually look better.