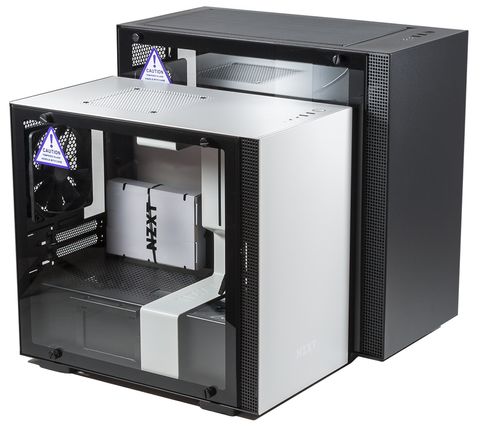 As with the H700i we reviewed earlier, both the H200i and H400i command a strong lead in our thermal benchmark, running several degrees cooler than every other case in the comparison. We also see that the increase in case volume and airflow in the H400i leads to cooler temperatures over the smaller H200i.

The same design characteristics that provide the H200i with such strong airflow also let more noise escape the case, making it the loudest cases at full fan speed in today’s comparison. The H440i’s larger size puts our sound meter slightly farther from the main source of noise (the GPU fan), thus making it slightly quieter than the H200i.

The H200i’s increase in cooling performance is still greater than its decrease in noise performance, giving it second place overall when it comes to efficiency. Yes, we know it’s technically third place in the chart, but the H400i isn’t a Mini-ITX case, which disqualifies it from any direct comparisons.

It’s been awhile since we’ve given our Editor’s Choice award to a compact case, and if memory serves us correctly the last Mini-ITX case to achieve such performance was the Define Nano S. Although the H200i’s $130 price tag doesn’t exactly make it a budget case, it is one of the best performing Mini-ITX cases we tested in well over two years. That said, we feel the H200i’s strong performance-per-dollar value, coupled with its good-looking steel and tempered glass design, and its included RGB lighting and fan control make it an excellent product deserving of such an award.

As for the H400i? Even though we don't have any direct comparison data by which to judge it, its equally strong performance, coupled with its added features and only slight increase in price is also enough to earn it our Editor's Choice award.