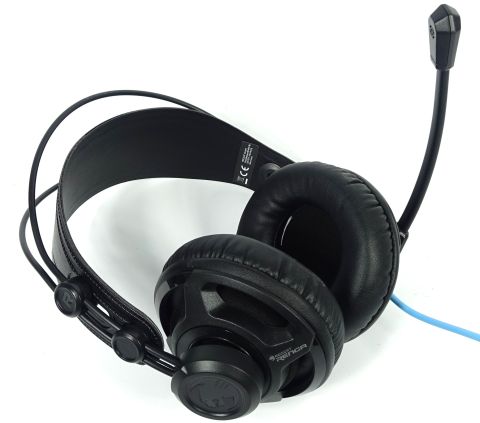 Roccat manages to pack some refinements into the Renga, even at this low price. The company had to make some compromises, of course, but the comfort and quality of the hardware is admirable, and the audio and mic quality are quite reasonable. This is an excellent value.

The $50 price bracket forces you to make compromises. It lands you somewhere between bargain-bin headsets without many redeeming qualities and higher-end models with a lot more features starting around $75. Are there gems to be found in that middle range?

Roccat would like us to think so. The company tries to strike a balance with its stereo headphones that mix acceptable sound with good comfort, along with a reasonable price tag. This is an open-air solution that aims to be more than an amplified bass drum.

Since the headset doesn't boast simulated surround sound or any other type of acoustic manipulation, it only really needs a Y-adapter for combining two 3.5mm jacks into a multi-jack connector. That gives you microphone-out and stereo-in from the headset, ensuring compatibility with PS4, Xbox One, and any number of mobile devices.

To be honest, Roccat's Renga appears deceptively high-quality. Its material mix seems almost perfect at first glance, reminding us of much more expensive headsets. The polyurethane not only looks appealing, but it feels good in our hands. Even the headband mimics a real piece of leather well. In the end, the materials are so cleverly styled and blended that Roccat deserves kudos for its work.

Our only real criticism is the cheap, rigid cable covered with a plastic shell. Its color may match Roccat's corporate identity perfectly, but it smells like the plague and offers little flexibility or suppleness.

A clever concept doesn't require resizing the Renga's headband to make it fit. Instead, the band simply stays flexible enough so that you don't require vertical adjustments at all. The mechanism slides and bends as desired, allowing the plastic headrest to adapt to your head shape.

Unfortunately, if you're short on hair, the headband may get sweatier than a lot of other padded designs. The Renga might not be ideal for you if that's the case.

This open system's large ear pads are big enough to fit over any size of ears, and they provide a comfortable seal. You'll even be fine with glasses on (though on-ear headsets tend to work better in that case). After hours of use, sweaty ears were never a problem for us; there is always plenty of ventilation.

There is a control unit built into the cable. You'll find a volume knob on one side and a small switch for muting or enabling the microphone on the other. Both controls could have been a little bigger.

We'd have no problem getting used to the control unit. But that stiff and bulky cable is less tolerable. It's always in the way!

As mentioned, this headset features an open design. In the following picture, you can see a gap between the ear piece/driver and ear pad. This means that ambient noise is clearly audible at all times. On the bright side, you'll never miss a call for dinner.

Of course, anyone listening to their tunes loudly on a plane, train, or bus is bound to attract glares from neighbors. Just be aware of who might be in range before sharing content others might find objectionable.

The omnidirectional microphone is positioned at the end of a folding (yet completely rigid) arm. Its level is relatively low, so you may have to raise your voice quite a bit to make yourself heard. Fortunately, modern audio codecs usually include support for adjustable mic gain, as much as doubling sensitivity.

If you go that route, the result sounds pretty good, especially since raising the level via software hardly generates any additional noise. Speech remains fairly intelligible. But because of Roccat's price tag, there is no real low-cut filter, no compressor, and no clipping.

Our measurement results reveal that Roccat is using heavy bass in an effort to hide the Renga's acoustic compromises. In the company's defense, though, we should also note that the drop-off on either side of 100 Hz is relatively shallow. Let us not forget that we're dealing with a $50 headset here.

The subjective listening test turned out to be unexpectedly pleasant for a piece of hardware in this price range.

Down low, Roccat serves up plenty of bass, even if it doesn't make much of an impression as real low bass. The tuning, which leans toward upper-bass, may trick untrained ears into hearing the full range, when in fact the subcontra octave is hardly perceivable at all. This is a flaw that not even an equalizer can fix, as the flat 50mm drivers simply lack the necessary level stability. Another technical challenge is the open concept, since low bass, which relies on small ear pieces for a resonating body, is difficult to achieve with this design.

Nevertheless, what remains is not bad (though a slightly more powerful driver would have worked even better). Anyone biased to drum beats and explosive gaming will probably want to look elsewhere, while first-person snipers may be more interested. Spatial resolution, including good acoustic positioning of incoming opponents, is pretty good as long as output levels stay within reasonable ranges.

The experience is similar from the lower to higher mid-range. Though slightly underrepresented, the mid-range is technically present and good enough to reproduce the fundamental frequencies of almost all instruments and voices with ease. The timbre remains reasonably natural. This also applies to sonority in the somewhat higher range (important for making sounds recognizable).

High and super-high tones are of average quality. An overemphasis at about 6 kHz makes the sibilants sound somewhat sharp. As a result, some instruments get an almost metallic touch. This isn't a big deal for gaming, fortunately. Only trained music lovers will really notice the dent at ~9 kHz, and this particular detail is in fact rather unpleasant since it causes strings and wind instruments to lose some of their high-frequency brilliance.

We are left with the positive feeling that Roccat made an honest attempt to achieve reasonably neutral and balanced sound, even though the Renga does suffer from necessary cost-cutting measures.

We've eliminated our "Editor Recommended" award, but if we hadn't, the Renga would get one. How can a $50 headset earn a purchase recommendation? Despite slight weaknesses in sound, level stability, and microphone sensitivity, the total package represents such good value for your money that it's almost a bargain. If you want more than what the Renga offers, you'll have to dig deeper into your wallet. At its current price, Roccat already offers more than you could reasonably expect.

Sure, the economic constraints are obvious every step of the way. It is even possible to physically feel them in the rigid cable and somewhat under-powered drivers. But we still feel the headset deserves a recommendation as an all-around performer. This is no exaggerated sub-woofer, even if Roccat tries advertising it as such. The Renga simply can't be due to its open design. The result still sounds mostly natural with distinguishable nuances.

We found the astonishingly good spatial positioning and relatively comfortable fit of this flyweight, which works well even on larger heads, to be especially appealing. For all of this and a reasonable price, our purchase recommendation is well-earned.