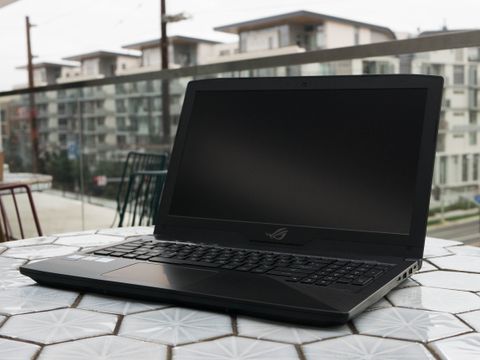 The Asus ROG Strix GL503VD contains a 4-cell, 64Wh battery, which provides the laptop about 1 hour and 40 minutes of uninterrupted game time. The Strix’s battery life is not bad, by any means; if we were to compare it to hefty gaming laptops with CPUs and GPUs, the Strix would top our charts. However, the laptops in our roundup all have a good combination of low-power components and large batteries.

Last place goes to the Acer Predator Helios 300, whose more power-hungry GTX 1060 prevents it from topping our chart. The Sager NP6852 has a slightly smaller 62Wh battery and a GTX 1050 Ti, placing it in fourth. The Dell Inspiron 15 Gaming 7000 earns silver by outlasting the Asus by about 20 minutes; its stronger GTX 1050 Ti is balanced out by a 74Wh battery and weaker Core i5-7300U. Finally, the Acer Aspire VX 15 has a fairly standard 52.5Wh battery capacity, but it also features the lowest-end configuration out of the featured laptops.

Normally, we use our Optris PI 640 infrared camera to measure the laptop’s thermals. However, as we stated in the Product Tour, the system’s hard drive is connected to the bottom panel of the Strix. This means that we couldn’t capture thermal images with the cooling solution exposed. Instead, we used GPU-Z's GPU diode thermal logging. For more information about how we test, be sure to check out our Measurement Science article.

Thermal performance is always a priority when considering a gaming laptop; packing power-hungry components into a small enclosure is a surefire way to produce heat. Luckily, none of the components in our featured laptops has particularly demanding cooling requirements. A decent cooling solution will keep temperatures low. In comparison to its contenders, the Asus ties the Dell in third place, and the deciding factor is only a handful of degrees. The Sager is an outlier, and we found that its cooling was simply inefficient, driving its GTX 1050 Ti’s temperatures up to 100° C.

The Asus runs quite cool overall, and you shouldn’t be worried about the GTX 1050 overheating during extended gaming sessions so long as you’re playing in a relatively cool environment.

We used the SpectraCal C6 Colorimeter to measure the display. Be sure to check out our Display Testing Explained article for a full description of our test methodology.

No display has perfect RGB balance; unfortunately, the Strix is a good example of this. From minimum brightness, RGB levels are balanced, and remain so until we raise brightness to about 40%. However, increasing the brightness further causes green levels to drop and blue levels to rise. As a result, the display delivers a slightly bluish tone.

Grayscale accuracy is intimately tied to a display’s RGB levels, and is measured in DeltaE 2000, with values of 3 or lower being imperceptible. The Strix has an average DeltaE 2000 of 4.415, meaning grayscale inaccuracies are readily visible. In particular, you’ll notice the errors at 60% brightness and higher. Lower brightness settings have less grayscale errors.

Overall color accuracy is measured the same way as grayscale, meaning values of DeltaE 2000 below 3 represent excellent accuracy. Unfortunately, the Strix’s display exhibits an average DeltaE 2000 of 4.832, which means the color errors are noticeable. In particular, you’ll find errors in blues, yellows, cyans, and greens. However, the Strix easily has the most color-accurate display in this test group, so it should be your first choice if color accuracy is somewhat important to your needs.